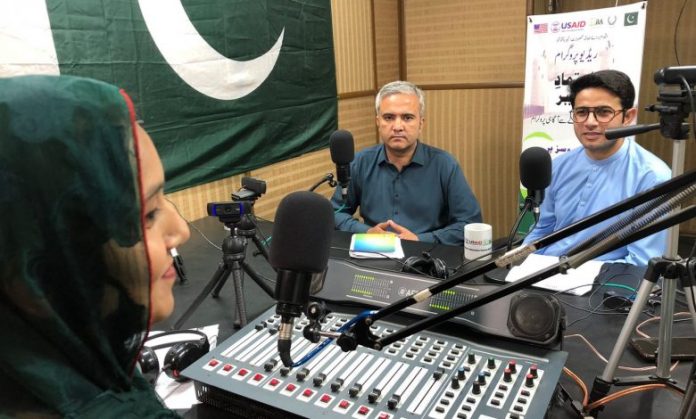 Khyber Pakhtunkhwa Revenue Authority (KPRA) has launched a computerized system for collecting taxes from the sales services providers in the province.

The system will make it easier for sales services providers for paying their taxes.

To facilitate the public regarding the how to use this system by the taxpayers, KPRA has also launched an awareness campaign with the help of USAID funded KP Revenue Mobilization Programme (KPRM).

Under this campaign, taxpayers are informed about the using the system for paying taxes.

KPRA spokesperson Sohail Raza Khattak said that this entire system was online. He said that in the past, taxpayers needed to go to bank to pay their taxes; however, now this system has been made online.

“Now taxpayers can pay their taxes online,” he said.

He said that in a case of unavailability of internet, the taxpayers can also pay their taxes with EasyPaisa and in areas lacking this they have introduced completely manual system.

Mr Khattak thanked the USAID for helping he KPRM For training the authority’s staff about digital technologies. In addition to this, he said that KPRA has also setup a call center and tax payers can call the number on 091-111005772 from 9am to 5pm in the evening.

Besides, he said that the authority has also e-conferencing system as well which connected them to other provinces as well.

Mr Khattak said any taxpayer with a complaint can approach nearest KPRA office with his grievances.

Mr Nawabs said that it was impossible to run this system without technology and this entire system was based on a single click.

“This system has helped increase registration and tax collection,” he said.

He said that the authority had taxpayer profile, returns and other relevant documents. Besides, he said that USAID has also helped in training the staff.

“This system helps us in tracking growth, decline, declarations and registration figures,” he said.

However, he said that in case of failure to pay taxes, the authority used manual system for fines and imprisonments.

On the other hand, Mr Khattak said that taxpayers can approach the authority regarding any issue on its WhatsApp number on 0333-1421423, Facebook and YouTube. “These questions are really important for us as such feedback helps making improvement in our operations,” he said.

He said that in case of failing to submit one’s return, a taxpayer can face fine up to Rs 5000 for a month long delay and this can further go up in case of more delays.

Mr Khattak said that those responding on KPRA call center very knowledgeable about all aspects of taxation system.

Regarding tax returns, he said that this was completely online system and taxpayers can know about it from the authority’s YouTube channel.

Besides, he said that KPRA was working on developing a mobile app and was in contact with other organizations in this regard.

In addition to this, they have also setup a complaints desk at the authority to respond to taxpayers complaints. “Taxpayers can contact us on our WhatsApp number and in case of any mistake the authority can take action against its personnel,” he said.

In addition to this, regarding the women registered with KPRA, he said that they introduced restaurant invoice management system (RIMS) for them and imposed three percent tax.

In case of non-existence of RIMS, then they taxpayers will have to pay eight percent.

Besides, he said that they have appointed women in senior positions in the authority and notified officials for resolving women problems.

He said that the authority was going towards the digitalization of and scanning record of its 19,000 taxpayers to protect the data.

“This enables us to preserve the records,” he said.

Mr Khattak said through its CMS system, the authority sends a message to its taxpayers before 12th of every month reminding him to pay his due tax.

A reminder is issued on 20th of the month and action is taken against them in case of failing to pay their due tax.

He said that authority usually avoided confiscation of tax record of a taxpayer and instead tries to not lead the matters to go that extreme.

The authority tries to persuade them to pay their taxes.