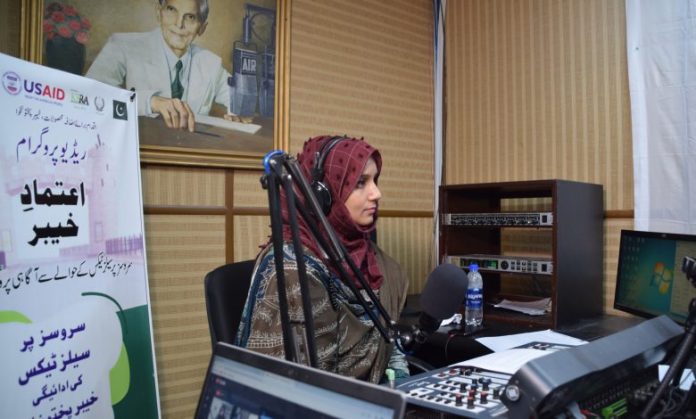 The system issues printed receipts to customers and thus helps in the documentation of the economy.

KPRA has with the help of the USAID is running an awareness campaign to collect taxes and document the economy through the RIMS.

Sonia, an audit officer at the KPRA said that RIMS was software, which has been programmed by IT experts to catch tax fraud and cheating. She said that the software was installed in a machine and whenever an establishment issued a receipt to a customer, the receipts is printed through this machine.

Ms Sonia said that the printed receipt has business National Tax number on it and sales tax collected on it goes to the KPRA.

She said that RIMS has been built to collect taxes from the hotels and restaurants. “We are going to make tax collection software for beauty parlors and salons as well and they would be named after the relevant sector,” she said.

She said that due to the best results, the authority was setting up the same system in hospitals and salons. “Last week, we installed RIMS system at two salons,” she said.

However, she added that the system was being installed free of cost.

She said that this system brought transparency to the entire business. “It provides the KPRA with insights about sales and purchases, sales tax, profits and other issues of a business,” she said.

She said that in the past, hand written receipts were given to the customers without deduction of tax. However, she added that installation of RIMS system was satisfactory for the customer and also ensured keeping the books clean.

She said that a receipt from RIMS was satisfactory for the customer in the sense that he or she could be certain that five percent tax paid has gone into government treasury and could be put to use for the welfare of the people.

Besides, Ms Sonia said in case of giving a receipt not having the NTN number, the customer can demand for a proper receipt. In case of non-compliance, the customer can approach the KPRA and the authority can take action against such a business, she said.

Ms Sonia said that RIMS brought transparency in all kinds of businesses. She said that it made the job of tax payment easier and also saves them from future issues. She said that those desirous of installing RIMS can contact the KPRA’s IT section.

She said that this software has never been hacked.

However, she said that KPRA always strived to persuade the businesses to become a part of tax net; however, reluctance and resistance to installation of RIMS may result into legal action.

She said that such a legal action entails inquiry regarding income as well collection of data and in case of irregularities such establishment could even be sealed.

The KPRA authorities’ documentation of economy also helped the businessmen with insights about their businesses. They said that many people were approaching the authority for the installation of the RIMS at their outlets.