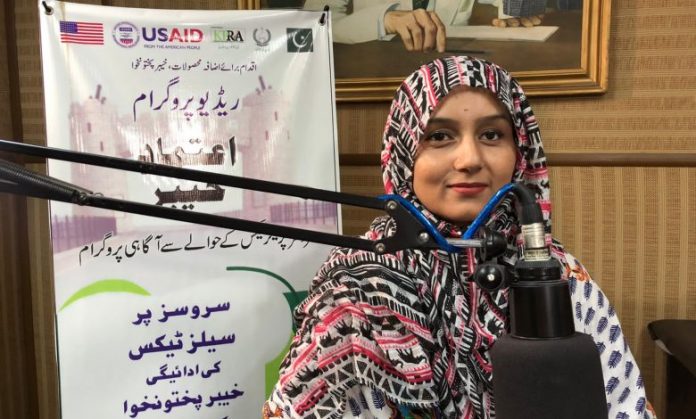 Khyber Pakhtunkhwa Revenue Authority (KPRA) officials said filing of tax returns was of vital importance in the documentation of the economy.

To this effect, KPRA is running an awareness campaign regarding the importance of tax and filing of the tax returns with the help of the USAID funded KP Revenue Mobilization Programme (KPRM).

KPRA’s director tax policies and reforms Aftab Ahmed said that all those service providers  regulalry paying taxes were taxpayers and when they file their tax returns, they become tax filers.

He said that the tax returns tell that about the nature of business of the service providers and help him pay his taxes to the authority. Besides, he said that in case of mistakenly depositing KPRA tax with the Federal Board of Revenue; such a payment could be reverted with the help of the tax return.

On the other hand, Sonia Jabeen, audit officer KPRA said that when a filer paid his due tax, his business was registered with the authority. She said that tax returns could be filed online and authority’s technical team was ready to assist in this process.

Ms Jabeen said that the number of tax filers was also on the rise.

On the other hand, Mr Aftab said that many people paid their taxes while did not bothered to become filer. “Some of them do so due to their ignorance of process of becoming a filer,” he said. However, he said that they have uploaded videos to the KPRA’s YouTube channel, explaining the process of filing tax returns.

Besides, he said that the authority officials made phone calls to taxpayers who fail to file their returns asking them to submit their tax returns.

Mr Aftab said that the authority messaged the taxpayers at the start of every month to pay their taxes and file returns. He said that in case of non-compliance, another reminder is sent on 18th of every month. Besides, he said that some filers pay consultants to file their returns; however, he said that they can seek the KPRA’s technical team help without any cost in filing returns.

Mr Aftab said that no filing of tax returns could invite legal consequence. However, he added that before legal action, the authority’s tries to persuade the service providers to file tax returns.

“Those who fail to file their returns even after this can face fine up to Rs 300 per day and in case of further non-compliance, the fine can go up to Rs 5000,” he said.

Mr Aftab said that 18th of the every month was the last day of filing tax returns with the KPRA and even in case a holiday falls on this day, the returns could be filed online.

Mr Aftab said that tax returns were not only crucial nature for tax authorities but at the same time vital for country’s as they helped in the documentation of the economy.

Mr Aftab said that the tax KPRA collected was an activity based provincial tax. “The taxpayer will pay if there is some activity; however, will file return even if there is not activity without incurring any financial loss,” he said.

He said that no tax-break has been announced for flood affected areas. Besides, he said that the floods have mostly affected those areas, which were already enjoying a tax break till 2023.

He asked the taxpayers to pay their taxes and file returns regularly and KPRA will assist them in case of any problem.

Mr Aftab said that ignorance of law could not be used as excuse and for the same reasons KPRA also communicated its taxpayers asking them to file their returns.