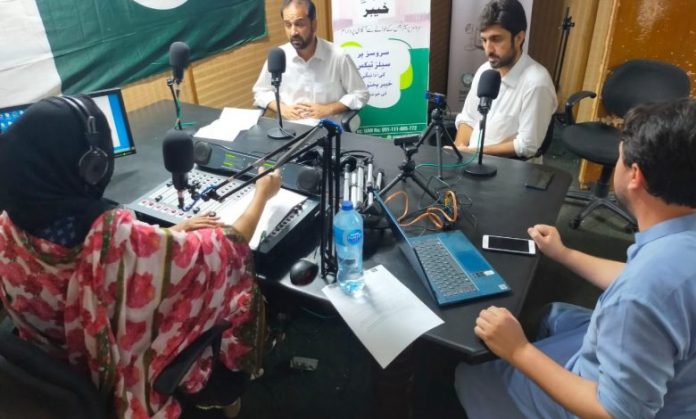 Khyber Pakhtunkhwa Revenue Authority (KPRA) was setup after the collection of sales tax on services became a provincial subject after the 18th Constitutional Amendment.

KPRA officials said that the authority collected sales tax on provision of any types of services in the province. The proceeds of the sales tax collections are spend on public welfare, construction of roads, security and health facilities.

In order to spread awareness regarding the payment of taxes, KPRA has started using various media platforms in collaboration with the United States Agency for International Development (USAID) to make the people understand the role of taxes they pay in the development of the province.

KPRA spokesperson Aftab Ahmed said that the authority was setup in July 2013 in the aftermath of 18th Amendment. “KPRA job is to collect taxes from the province’s financial resources,” he said.

Mr Aftab said that people confidence on KPRA was growing with each passing day. “The yearly increase in tax collection reflected public confidence in the authority,” he said.

Mr Aftab said that in the first year, only 200 people were brought into the tax net; however, this figure has now jumped up to 17,000.

To a question regarding the massive differential between 40 million population and smaller number of tax payers, Mr Aftab said that entire population of the province was service providers. “There are many jobless people and also a large number of children,” he said.

However, he added that they were working on a policy to collect sales tax from general stores.

In his 2022-23 budget speech, KP minister for finance Taimur Saleem Jhagra appreciated the performance of the KPRA. Mr Jhagra said that province’s revenue collection has grown by 122 percent and it was making possible for them to provide facilities to general public.

On the other hand, KPRA figures showed that its collection has grown by 82 percent as compared to 2021. During May this year, the authority collected Rs 6.27 including Rs 1.5 billion in sales tax and Rs 5.2 billion in infrastructure development cess.

In addition to this, KPRA has also during the ongoing fiscal has also approved the Sales Tax on Services and Revenue Bill 2022 and the law has also been extended to the whole of the province.

Abdur Rafiq, deputy collector KPRA said that devolution of Sales Tax collection to the province would positively impact the people.

He said that the KPRA collection which stood at Rs 30 billion would likely jump to Rs 60 billion in next two years.

He said that besides collection of sales tax on services, KPRA also collected infrastructure development cess from those businesses involved in imports and collected at the border crossing.

Besides, the KPRA officials have appealed to the general public to pay their due taxes as it was impossible to run a state without payment of taxes.