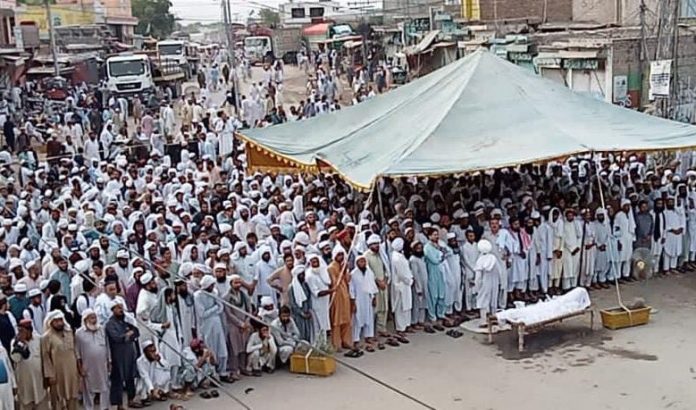 Locals in Begukhel area of Lakki Marwat are protesting against the killing of a youth at the hands of police since last night.

The youth was killed in police firing in the Begukhel area of the district on Monday.

The area residents have closed down Bannu-Mianwali Highway in protest against the youth killing. The youth’s funeral prayers were also offered at the road and large number of locals attended the final rites.

On the other hand, police and district administration is keeping a mum over the incident. Shafiulah Begukhel, a local elder said that their tribesmen were being forced to repeat the past’s history. He said that they were shifting the dead body to the session judge court and would be forced to do armed protest if the FIR was not registered against police.

Meanwhile local people blocked the highway connecting KP with Punjab since Monday, causing immense problems for the commuters and passengers. Long queues of vehicles stretch for several kilometers in the area while police and district administration was missing from the scene.

On the other hand, police claimed that the slain had opened fire on a police’s private car which forced the cops to respond to the attack. The firing led to the youth’s death.

On the other hand, police claimed that slain Saleem Khan had four cases registered against and was held on possessing drugs in 2015.

However, Waheed Aslam Khan Begukhel, who is also a member of Marwat Qaumi Jirga said that he personally knew the slain and he has nothing to do with drug paddling. However, he said that police might have arrested him for smoking charas, which even did not carry any punishment.