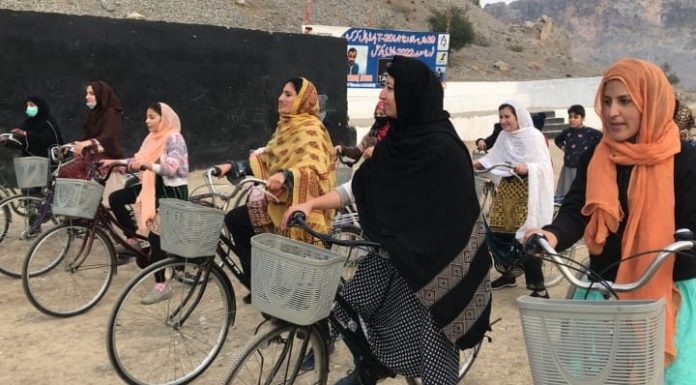 The organizers of the first-ever girls cycling camp in Landikotal tehsil of Khyber district are receiving death threats.

Jamaima Afridi, one of the cycling race organizers told TNN that she had arranged the event along with international cyclist Samar Khan; however, after the event she was getting death threats from community.

However, Jamiama said that when she took up this with her family members, they supported her and the event became possible with their help.

“I persuaded local population about holding this event and later practiced for a day inside house compound before holding the race in Tatara Ground,” she said.

A total of 15 local girls turned up at the cycling race which was held under the support Global Sports Mentoring Programme.

“The participants were so overjoyed over being able to ride a cycle that they were not ready to stop,” she said. They really quickly learnt to how to balance a cycle.

She said that event was aimed at empowerment of tribal women and attracts them towards healthy activities. “Not only I faced criticism but people are threatening to kill me and event protests have taken place against this race,” she said.

However, Jamaima added that she was not worried but asked the authorities to play its role. “Unlike me, other girls cannot take a stand,” she said.

Besides, she said that all the participants were wearing traditional dresses.

On the other hand, Samar Khan said that she wanted the tribal girls to make Pakistan proud, like she was doing with her cycling and this event was aimed at the same.

“Tribal girls are very talented and were also supported by males and I I am very pleased with my interaction with them,” she said.

She said that girls only needed opportunities and they have the urge and guts to bring laurels to their country.

Earlier on Sunday, Jamaat Islami and other religious parties staged a protest in Landikotal Bazaar against a cycle walk. The speakers at this occasion declared the race as obscenity and against the local traditions. They also said that they will not allow this sort of activities and women should follow Islamic injunctions of Purdah and not take part in such activities.