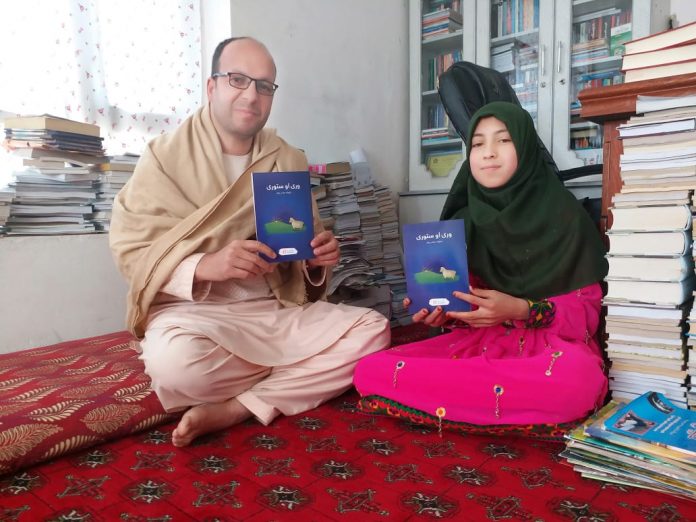 Malalai Waqar, an Afghan school girl used to attend her school hoping to study medicine, until the Taliban takeover of Kabul dashed her dreams.

The deaths of women and children during childbirth due to absence of doctors and health facilities across Afghanistan always kept her preoccupied with the idea of doing something for them.

She was in seventh grade at the time of fall of Kabul. Malalai is daughter of a prominent Afghan journalist and social activist Habib Waqar. Malalai gained widespread fame when she authored her first book وری او ستوری or the Star and the Lamb. The book was widely praised by writers and critics; however, this happiness was short-lived.

Malalai had no inclination that one day she had to leave behind her home, friends, schools and relatives and turn into a refugee.

The fall of Afghan Republic on August 15, 2021 and Taliban ascendency dealt a death blow to the dreams of Malalai and million others of Afghan girls.

Malalai attended her school briefly, attired in her school uniform and returned home quickly. Taliban banned education of girls on the very first day of their rule depriving girls Malali Waqar of their right to education. From this onward, Malalai was unable to attend her school.

However, her father embarked on arduous journey to fulfill his daughter educational dreams and arrived in Peshawar after taking a circuitous route via Kandahar and Quetta.

However, it did not go well for the family.

Mr Habib Waqar applied for a Canadian visa and after a year in Peshawar shifted to Canada.

On the other hand, Malalai will spend rest of her life, thousands of miles away from native Afghanistan in the hopes fulfilling of her childhood dreams. Millions other Afghan girls are also counting their days in the hope of getting back to schools and continue their education.

It has been a year to Taliban takeover of Kabul; however, girls’ schools are still closed. Taliban have promised to reopen girls’ schools after formulating a policy; however, Afghan people have grown tired after waiting for about a year.

Afghan people are still dreaming that one day their daughters will go to schools.

Recently, some Taliban leaders have expressed their annoyance over delay in reopening of girls schools and said that they will reopen the schools.

Afghan Taliban spokesperson Zabiullah Mujahid recently regretted the closure of girls school and said that he would reopen them tomorrow if it was in his power.