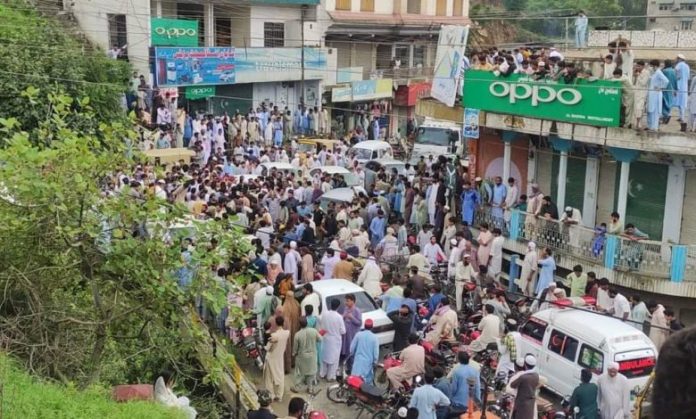 Marriage of a Muslim man and 25 years old Sikh girl in Pir Baba area of Buner district has pitched the both communities against each other.

The Sikh community termed the marriage as forced conversion and staged a protest in the area and closed roads for traffic.

Father of Sikh female Deena Kumari who had married a Muslim male Hizbullah also approached the police to register a case of kidnapping and forced conversion. He also demanded the federal and provincial government to hand over his daughter to him as soon as possible.

However, Ms Kumari appeared before a magistrate and rubbished the allegations of kidnapping and forced conversion. She said that she had converted to Islam of her free will and married Hizbullah.

Ms Kumari said that she 25 years old government school teacher and had right to choose her life partner.

She said that she had decided to convert to Islam of her free will and she was happy with her decision. “My family wants to send me to Darul Aman while I want to go with my husband,” she said.

On the other hand, Hizbaullah, said that there was no forced conversion involved in their marriage. “We want to spend our lives together. However, he said that Ms Kumari family wanted to take her away and neither she nor her were ready to allow this to happen.

“Deena Kumari is my honor and we do not trade off our honor,” he said.

On the other hand, Sikh community has closed down Mingora, Mardan and Daggar roads in protest against this incident. Gurcharan, father of the Ms Kumari told TNN that her daughter was teacher the government girls high school Gadizai. He said that his daughter was kidnapped after the school closed. “When we tried contacting school administration, they informed me that my door was absent from her duty,” he said.

He said that even Pir Baba police also in cahoots with local Muslims. “Before registration of FIR a local youth identified as Hizbullah shown us documents of court marriage to us,” he said.

He said that government should provide security to them and hand over his daughter to him. “Legal action shall be taken against the youth and in case of delay in action, they will protest all over the country,” he said.

A large number of Sikh communities are living in Buner since 1934 and both Sikh and Muslim communities enjoy good relations. However, it is second incident of its kind wherein a Sikh girl has married a Muslim after converting to Islam.

Earlier in 2017, another Sikh girl from Gurghasthi area had married a Muslim male after converting to Islam.

Police stance on the issue

District Police Officer Buner Abdur Rashid said that the police have taken the girl in its protective custody after the family reported the matter.

However, he said that no FIR has been registered in this case so far.

He said that girl had done MA in English literature and 25 years old and no one can forced her into a marriage.

However, he said that they have forwarded the matter to the court.

On the other hand, district administration has sent Ms Kumari to Darul Aman after consultation with the family, where she will stay till court judgment in her case. However, Ms Kumari said that she did not wanted to go to Darulm Aman, while the family of Hizbullah said that they would took to streets if Ms Kuamri was not allowed to go with them within 24 hours.