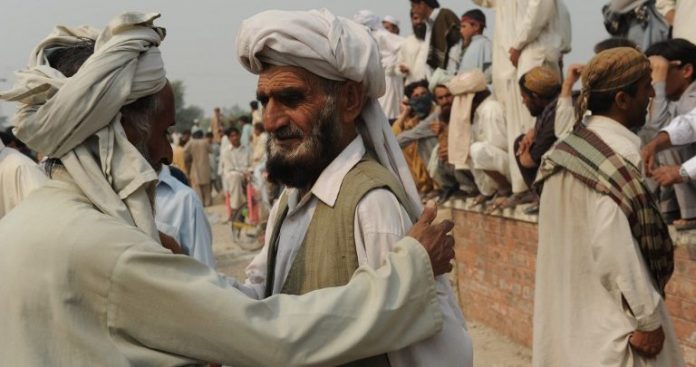 On Friday, February 25, there was an unusual rush of people in the Jirga Hall, located in Civil Colony in Nawagai subdivision of district Bajaur. More than a hundred members from the community had gathered ahead of the Friday prayers to raise their concerns and provide feedback to government officials and elected representatives on the ongoing development work in the region. From masharan (tribal elders) and students, academics, lawyers and business owners to daily wagers and people from marginalized groups – people of all ages, educational and economic backgrounds participated in the discussion.

This gathering was a part of the district consultation drive held by the Government of Khyber Pakhtunkhwa (KP) that was organized in each of the 25 subdivisions (seven districts and six former Frontier Regions) of the merged areas to acquire people’s feedback on the ongoing development work. The exercise was facilitated with technical assistance from the Merged Areas Governance Project (MAGP) of United Nations Development Programme (UNDP), supported by the United States Agency for International Development (USAID) and attracted around 2,700 people from across the merged areas.

This was not the first time such a drive was held in the region. After the merger of erstwhile Federally Administered Tribal Areas (FATA) in 2018, the KP government held a similar consultative drive in March 2019 in an effort to fulfil its pledge to the people of MA and ensure their needs were addressed under the first phase of Accelerated Implementation Programme (AIP) – the largest multi-year scheme under the provincial government’s Tribal Decade Strategy (TDS) that seeks to build responsive institutions and bring the region at par with other areas of Pakistan. Based on people’s feedback in the first consultation drive, Rs108 billion has been spent so far on development schemes under AIP-I (2019 – 2022).

“However, circumstances have changed the worldover in the last three years with the pandemic and the subsequent recession, and changes in the regional geopolitical situation. Therefore, we wanted to ensure the upcoming AIP-II addresses the current needs of people in the MA,” said KP Additional Chief Secretary Shahab Ali Shah. “With our partner MAGP, these consultations on subdivision level have helped us bring people’s voices to the highest tiers of policymakers to create context-specific solutions,” he added.

One of the most common demands residents put forth in the consultative sessions across the MA was education for girls. “In almost every subdivision, people emphasized on the need for education for girls, a welcome shift in the mindset among the general public of the MA,” said MAGP Sector Specialist on Infrastructure Tahir Azeem, who facilitated the consultative sessions in Bajaur, Khyber and Mohmand districts.

“People’s main concern was high absenteeism among teachers in girls’ primary schools,” he explained. Literacy rate in the tribal region is extremely low, especially for women. As per the AIP baseline survey conducted by the provincial government and MAGP, only 22% of females from were educated up to secondary level whereas the rest have not received any education at all. “This means that women from local communities cannot qualify to become schoolteachers in government schools. Consequently, these positions are filled by women from settled districts who satisfy the eligibility criteria. However, because of the long and tiresome commute, many teachers don’t come to school. They also fear for their safety in daily travel, which acts as an additional deterrent,” Azeem elaborated.

Sharing people’s demands, he said the residents suggest the government relaxes the eligibility criteria and recruit more women from the local community to teach primary classes. “These women may not be as highly qualified but they can at least teach girls in primary schools,” Azeem said, adding that residents in MA want the provincial government to build working women’s hostels or cluster accommodations to facilitate teachers, especially the subject specialists the government hires to teach secondary school students. They also demanded transportation to facilitate female teachers, saying that it will lower absenteeism and allow their daughters to complete their education. Furthermore, people have demanded that the KP government extend the Independent Monitoring Unit of the provincial education department to the MA and keep a check on the quality of education being provided in the schools.

Another problem that people of the tribal region want the KP government to focus on is regulations for border trade. Business owners at the consultative sessions suggested that instead of closing the borders completely, the government should work on designing policies and implementing regulations that facilitate local traders and communities.

Speaking on the issue, former president Group Leader of Bajaur Chamber of Commerce Industry Haji Lali Shah said thousands of people lost their jobs when the border crossings got closed. “Not only the big businesses but daily wagers, labourers, fruit and vegetable sellers have been pushed further into poverty,” he explained.

“Movement for traders and pedestrians has recently been opened at Torkham Border. We want the same to happen on Nawa Pass, Ghakhi Pass and others. If not all, the government should open at least one of them,” Shah said, elaborating that since people in the tribal region have tax relief, micro enterprises is beneficial for the local economy.

“Stability and security along the border is vital to strengthen border economy. One cannot be achieved without the other,” Shah explained. “We can generate at least Rs 3 billion through bilateral trade, and change the economic landscape of not only district Bajaur but the rest of Pakistan as well.”

Speaking how this drive will impact the upcoming AIP, the MAGP Senior Coordination & Implementation Specialist Tariq Zaman said, “We have, through these district consultations, brought insight to technical experts creating the new AIP directly from the people who know their problems the most, the residents of the MA.” The district consultation drives began on February 24 and concluded on March 8. As AIP-I nears its completion in June 2022, formulation of AIP-II has begun with full swing. Development sectors that people of the merged areas have prioritized include education, health, roads, sanitation and drinking water, agriculture, and electricity among others. Development in tourism and mines and minerals sector fell on the lower end of the priority list.

“The exercise has helped us identify gaps in the ongoing development work. For example, people did not simply demand more schools or hospitals but they told us where exactly they faced a lag,” said the KP additional chief secretary. “To the people of merged areas, my message is: we have heard you, and we will continue to serve you.”