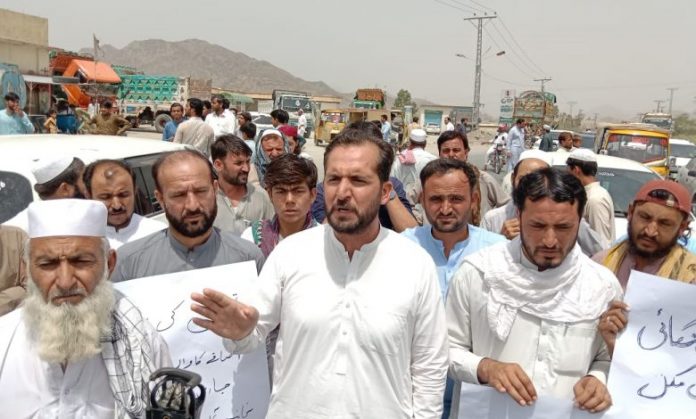 Mohmand Petrol Pump Association has threatened to close petrol pumps in a countrywide protest if government did not reverse the hike in petroleum products prices.

The association staged a protest at the Hussain Pump Ghalanai against the recent hikes in the prices of petrol and diesel. The protesters blocked the Peshawar-Bajaur Highway for about an hour and chanted slogans against government.

They were also carrying banners and placards, inscribed with slogans against government.

Speaking at this occasion, association president Hazrat Shah and vice president Zakir Khan rejected the three time increases in the prices of petroleum prices in two weeks. They said that pump owners will face great losses by selling petroleum products at these rates. Besides, they said that it was havoc for the poor people.

The association said that pump owners all over the country will protest against hiking of the prices.

The speakers at this occasion said that federal government has broken all the records of the inflation. “Government should reverse its decisions, otherwise, we will shut down petrol pumps in a countrywide protest,” they said.

The association said that soon a course of action in this regard will be agreed upon on the platform of provincial and national chapters of Petrol Pump Union.

They said that besides closure of petrol pumps, they will also go on hunger strike as well.

The speakers also said that incumbent government was total failure and has given nothing to people except inflation.

A large number of petrol pump owners took part in the protest.