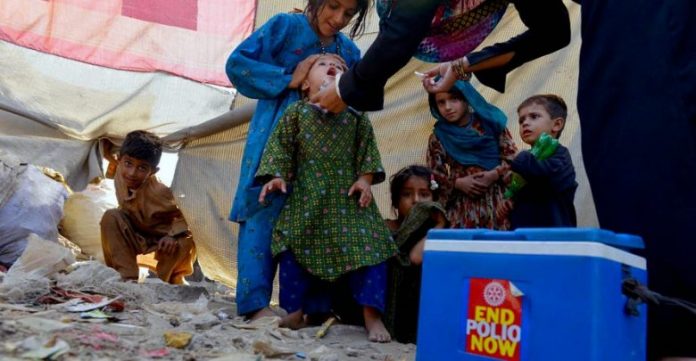 North Waziristan district has reported two more polio cases as a Frontier Constabulary (FC) soldier was wounded when unidentified motorcyclists attacked a polio team in Bara tehsil of Khyber district on Thursday. A polio worker also sustained bruises due to falling down during the attack.

Law enforcement agencies launched a search operation in the area after the attack while the polio campaign was also restarted after a day suspension.

Deputy Commissioner Khyber Shah Fahad told TNN that they have held a Jirga with local elders and they announced support for polio campaign.

The official said that the administration officials visited the area after the attack and met local elders and both sides agreed to foil designs of terrorists.

He said that they also agreed to fight the war on polio jointly and won it.

Earlier the authorities had planned to vaccinate 231,000 children against the polio and 931 vaccinators were deputed to vaccinate these children. Besides police personnel were deployed to provide security to all vaccinators and were following to them to all areas.

Deteriorating security situation in the district, arrival of large number of refugees from Afghanistan, refusals, inaccessible areas and presence of compound houses were some of the hurdles in the way of polio vaccinators.

However, DC Fahad said that they have collected data from across the district about the compound houses. “There are about 1500 compound houses,” he said.

He said that through a micro census, authorities have determined number of children and houses inside these compounds. “In the past, vaccinator used to treat compound as a single house, thus leaving many children unvaccinated,” he said.

However, he said that after this survey every child will receive vaccine.

Besides, the Emergency Operation Center has also termed the Khyber district as sensitive for the polio virus transmission as large scale movement of people can lead to transferring the virus.

In addition to this, authorities have setup transitory teams, which are inoculating children up to 10 years on roads.

He said that they have deputed a polio team at Torkham border to inoculate people in all age brackets to stop the virus transmission. The DC said that in addition to this they have also setup 10 transit points in the district to vaccinate those traveling.

On the other hand, KP health authorities have confirmed two more polio cases during the ongoing vaccination campaign.

He also feared more polio cases from the area.

The number of cases reported from Pakistan during the current year has jumped to six and all the cases have been reported from North Waziristan.

Besides, two cases have been reported from Malawi and Afghanistan.