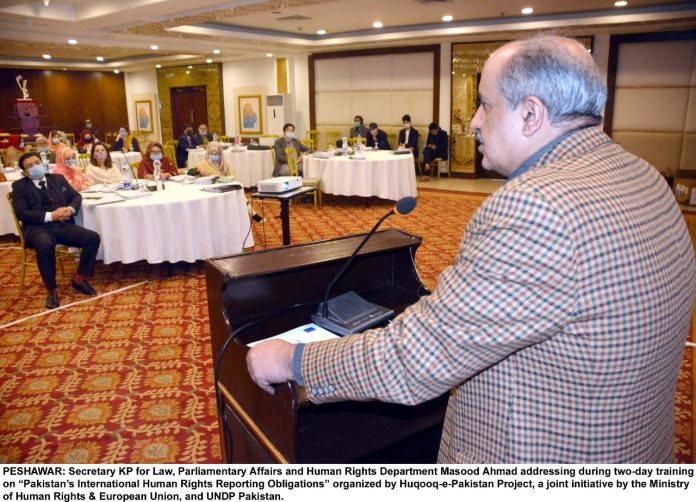 The training, which was inaugurated by Secretary Khyber Pakhtunkhwa for Law, Parliamentary Affairs and Human Rights Department Masood Ahmad, was aimed at enhancing the technical and operational capacities of the officials of the Khyber Pakhtunkhwa Human Rights and Minority Affairs Department and the KP Treaty Implementation Cell in reporting and implementation of international human rights commitments of Pakistan.

Secretary Masood Ahmad appreciated the support of Huqooq-e-Pakistan project in developing and implementing a flagship human rights training and capacity-building programme. He acknowledged the contribution of GSP Plus status in Pakistan’s economy especially after economic crisis caused by 2010 floods. He said that it is the responsibility of the state to protect the rights of citizens.

“The training will enhance the knowledge base of government officials that is required in fulfilling their mandates with respect to international human rights reporting. With better capacity, the relevant departments would be able to effectively reflect the government’s efforts for protection and promotion of human rights in their reporting for international commitments,” the secretary said.

Executive Director, Huqooq-e-Pakistan Project, Ali Dayan Hasan gave an overview of the HeP Project and its training objectives. He stated that the training program is designed in consultation with human rights stakeholders to ensure that the trainings reflected Pakistan’s realities and perspectives.

“Huqooq-e-Pakistan is the only human rights capacity-building project on this scale undertaken by the EU anywhere in the world which aims to foster relations between the EU and Pakistan by aiding Pakistan in meeting its human rights reporting obligations. It therefore represents positive and constructive human rights diplomacy,” added Ali Dayan Hasan.

The EU Promotion of Human Rights in Pakistan (Huqooq-e-Pakistan) is a European Union (EU) funded programme with the objective of supporting the continued efforts of the Government of Pakistan for the promotion of human rights.

In his concluding remarks, he thanked Huqooq-e-Pakistan, the Ministry of Human Rights, the EU, and participating institutions and expressed hope that this engagement would deepen in the months and years to come. He further stated that these trainings will facilitate stakeholders in understanding the reporting process, provides effective tools for reporting aiding in fulfilling the state’s treaty body obligations under the UN system.