Home KP Over 400 wildfire incidents across KP in about a month are alarming...
Facebook
Twitter
WhatsApp
Linkedin
Email 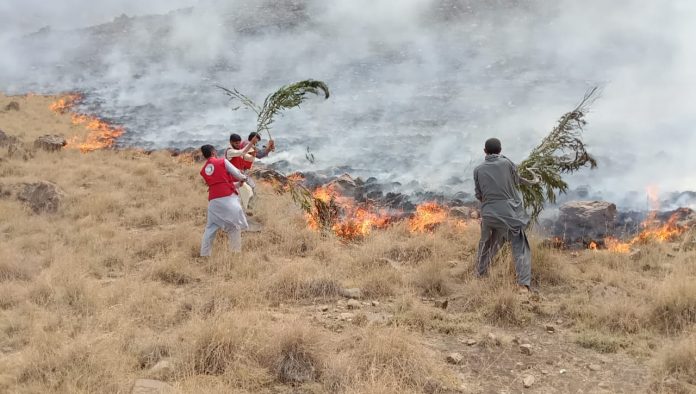 Gul Bashar Sheraz, deputy range officer wildlife department Mohmand district narrated a local man seeing a monkey with her infant was jumping from one to another tree, as a huge blaze engulfed the mountains of Baizai tehsil.

Mr Sheraz has battled the blazes that have erupted on the mountains of Anaargay, Aliengaar, Shamsha jarobi Darra near Pak-Afghan border.

Explaining the severity of fire, he said that it was so fierce that no one could have come closer  area the fire was raging and due to high winds, it was spreading to other areas.

As this was hilly and mountainous area so the access of rescue and firefighting operations was very much difficult and tricky, although Rescue 1122, wildlife, forest department, district administration and PRCS voluntaries were trying their best, but still all of them were unable to put down the fire from the most beautiful valley of Mohmand and failed in rescuing thousands of birds and insects, Mr Sheraz added.

He said that chukar, seese, dove, wood pheasant, monal pheasant and so many other birds migrated but their small species, eggs and nests were burnt in severe flames of wild fire. Similarly the habitat of other countless species of birds and insects were also destroyed. The historical Ailazai mountain is the only big mountain situated on the Pak-Aghan border, which has been divided into 12 wildlife colonies (Darras), this mountain is always full of costly trees and due to its height, it has a unique weather in the whole district.

Mr Sheraaz said that these mountains houses many species of wildlife animals like tigers, monkeys, wild cows, goats, porcupine and so many other local species of animals, but due to this fire incident a huge number of animals might have died and those surviving would be forced to migrate nearby mountains.

He added that these forests were like treasures and the only source of food and economy for these poor people living in far flung areas with minimum facilities of food, electricity and infrastructure. They are totally dependent on these mountains for their food, shelter and even business and trade.

Mr Sheraz said that there were many versions among locals about what causes these fires. He said that some people said that when someone lights a fire for creating smoke to bees to extract honey and then they do not put down the fire properly and as a result it causes a blaze and spreads to other areas.

Other believes that they deliberately burn the small herbs and shrubs in order to make a sound ground for the best breeding of seeds and shrubs.

In order to prevent our wildlife from disaster, he demanded the tourists put down all the fire flames properly, which they light for cooking purposes in the hilly and tourist areas. He said that even flying embers can turn the whole mountain into ashes. He also demanded govt. institutions to make full preparations to prevent this kind of incidents in future.

Gul Khan Kaka, another eyewitness said that they took two to three hours to reach the fire incident area from district headquarter Ghallanai.

He said that the dangerous fire flames were spreading very fast due to windy and top nature of the mountain and due to lack of facilities the most expensive trees were burnt in fire.

He said that they were thankful to the Rescue 1122 Bajaur and Charsadda, as their fighters and vehicles also took part in that operation. During firefighting two rescuers were also wounded.

He assigned the task to Rescue 1122 and forest department to prepare a complete contingency plan regarding wildfire incidents to prevent such kind of incidents in the whole Mohmand.

District Secretary PRCS Mohmand barnch Fauzee khan Mohmand told that they have at least 1200 registered trained volunteers in the tribal district. He added that Pakistan Red Crescent Staff and Volunteers reached the fire on foot due to lack of roads and difficult routes to the mountain range and effectively responded the wildfire in the area.

According to the report of Relief Rehabilitation & Settlement Department more than 400 fire incidents were reported in May and June. In these incidents five people including a Rescue 1122 firefighter were also killed in KP.

Beside this, in these fire incidents countless trees, herbs, shrub and wildlife to ashes.

The environmental scientists believes that this is a big threat not only to Biodiversity, climate change and environment, but due to these incidents the old and historic civilization of villages will came to an end, as a result of Environmental Migration.