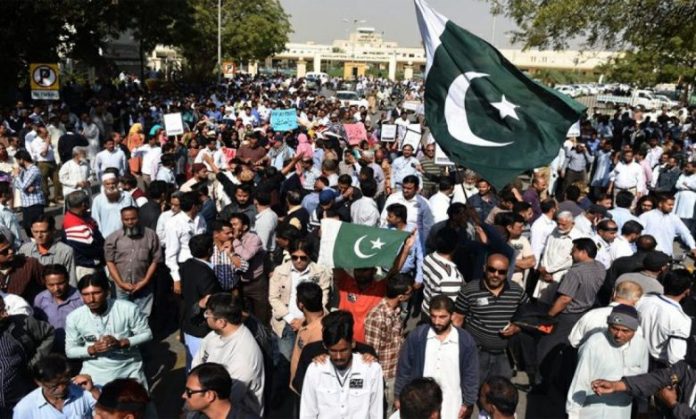 Pakistan celebrated its 75th Independence Day earlier last month with a democratic government in power. On the other hand, at the same time about 15 percent of Pakistan population is underwater due to the cataclysmic floods and most of the affectees appear to be dejected with the democratic government.

These affectees think that only military personnel could help them while political scientists believe that Pakistan problem was the absence of democratic attitudes as International Day of Democracy is being celebrated across the world.

The day is being observed to raise awareness about the importance of democracy.

Gul Wali Khan, 75 a resident of Nowshera district has currently his house under water while his family members are trying to salvage their valuables from the flood waters. Mr Wali said that people were satisfied in military rule as compared to democracy. “Even today we are waiting for military help,” he said.

Mr Wali said that what the use of democracy when military had to rush to rescue him when his house was under water. “We need people who assist us when we are in trouble,” he said.

However, many of the today’s youth think otherwise. Kashif Jan, a resident of Charsadda district told TNN that the history showed that people rights being trampled under dictatorships.

Mr Jan said being a political activist whenever he can take to roads whenever he disagrees with a government policies as they freedom of expression in democracy. Besides, he said that consultation on an issue always results into positive outcomes as compared to individual decision. Similarly, in democracy decision are made in light of public wishes, which always yield positive result.

These opinions of 75 years old and 25 years old youth encapsulate Pakistan’s history, where the elderly years for martial law while the youths is also discontented.

However, despite their discontent, the youth still think that the democracy is the best system and one should vote good people for offices.

Economist Intelligence Unit in its 2021 report placed Pakistan on 104 positions among 176 countries and declared the country has hybrid regime.

What the political scientists suggest

On the other hand, political scientists suggest that all three organs of state and military establishment have to play their role in strengthening democracy’s roots in the country.

Dr Aamer Raza, a political science faculty at the University of Peshawar said that many people support military dictators in Pakistan.

Dr Raza said that this mindset was changing as now even military establishment could not think of toppling democratically elected governments. Besides, he said that there was resistance of establishment was clearly visible.

Senior journalist Mazhar Abbas said that Pakistan was unable to change the laws it inherited from British raj.

Besides, he said that three military rulers ruled Pakistan and judiciary, military and politicians were to blame for the martial law.

However, he said that both the civilian as well as military rulers kept the public out of decision making while judiciary protected this.

He said that he considered the judiciary responsible due to the reason that they always ended up legitimizing the martial laws. “If courts had ruled for elections in 1977 and 1999, then definitely, the dictators would have held elections,” he said.

He said that instead of protecting constitution, judiciary legitimized the martial laws under the doctrines of necessity.

“Even this is a kind of dictatorship which did now allow democracy to take roots in political parties,” he said.

Similarly, he said that even judiciary failed to protect the constitution an ended up legitimizing martial laws.

“If we address these issues, then, the democracy will start bearing fruits over coming decades,” he said.

“Democracy is the worst form of government – except for all the others that have been tried.” he quoted former British Prime Minister Winston Churchill.