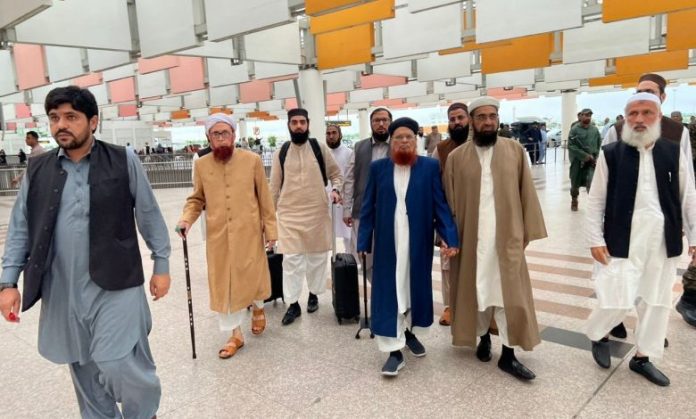 A delegation of Pakistani religious scholars has arrived in Kabul to hold talks with the Tehrik Taliban Pakistan (TTP) in connection with the ongoing peace talks between the government and outlawed group.

Though, the leader of the Pakistani delegation, a senior cleric Mufti Muhammad Taqi Usmani said that the delegation was visiting Afghanistan on the invitation of Afghan Taliban. However, observers of Pak-Afghan affairs link the visit to ongoing talks with the TTP and to soften the group hard stance regarding some of its demands.

Mufti Usmani, a leading cleric and head of the Darulum Karachi in a tweet said that they were visiting Afghanistan as good will gesture following an invitation of Afghan government.

He said that they delegation which comprises eight religious clerics, will meet Afghan prime minister and ministers of interior, education and other officials regarding relief activities, education and Islamic finance.

However, Afghan official news agency Bakhtar said that the delegation will also hold talks with the TTP leadership as well.

On the other hand, Pakistani President Arif Ali also in a tweet said that he has contacted Mufti Usmani after his delegation arrived in Kabul. Mr Ali said that he has offered the Afghan authorities assistance with online education for Afghan students.

He said that internet was not universally available in Afghanistan and in this regard Allama Iqbal Open University can help with the dissemination of educational material through television.

Despite the insistence of Mufti Usmani and Mr Alvi regarding the nature of delegation’s visit to Kabul, analysts believe that religious scholars were visiting Afghan capital to break the deadlock between both sides in the ongoing talks.

The visit is trust building exercise in ongoing talks

Rifatullah Orakzai, a senior Peshawar based journalist said that the delegation visit to Kabul was an attempt build trust between the government and the outlawed group regarding the ongoing talks. He said that earlier in June, a delegation of tribal elders had visited Afghanistan to hold talks with the TTP, wherein the group had put forward some tough demands to the Pakistani government.

“Since it was very difficult for government to accept those demands; therefore, the religious scholars’ delegation has been sent to Afghanistan to persuade TTP to soften its demands,” Mr Rifat said.

“Since TTP considered the war against the US as Jihad and since their departure, Taliban have taken over Afghanistan and in such a situation religious scholars visit could help break the ice,” he said.

Tahir Khan, an Islamabad based analyst of Pak-Afghan affairs said that formally Taliban or TTP have not released any details; however, an 18 members delegation including a federal minister was in Afghan capital for talks.

Mr Khan said since the TTP also revered the Mufti Usmani and other religious figures, therefore, government has solicited their help and sent them to Afghanistan.

He said that earlier Pakistan Army had also briefed the security committee of the parliament on the talk’s process with the TTP. Following this the military was given the green signal for initiating talks with the outlawed organization.

Earlier during the visit of tribal elders’ delegation, TTP had demanded the Pakistani government to restoring tribal status of the merged areas, reversing its merger with the Khyber Pakhtunkhwa.

Though both the sides have announced ceasefire at the initial stages of talks; however, incidents of violence and targeted killings are taking place in settled and merged districts.

Fata Research Center’s report stated that during the month of June, 14 security personnel were martyred and nine others were injured in 31 attacks. In addition to this, 22 civilians and 21 terrorists were also killed during the month.

On the other hand, until July 19, four security personnel, 12 civilians and 14 terrorists were also killed.

Many observers believe that Hafiz Gul Bahadur group and Islamic State Khurassan groups were behind the attacks in order to sabotage the peace process.

ISPR said that terrorists were involved in the incidents of attacking security forces and civilians, extortion and other heinous crimes.