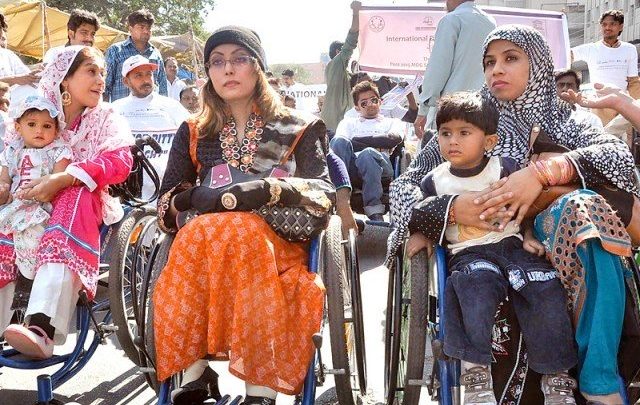 Though most of us feel sorry for persons with disabilities; however, never think of making their lives better.

Some days back, came across a video story on BBC Urdu about Muhammad Farhan from Lahore. Farhan is successful businessman despite his physical disability.

However, in Pakistan was everything was the exact opposite to this. “Here a wheelchair bound persons thinks sometimes that he could not do anything in Pakistan, but was it was totally opposite in Pakistan,” he said.

On the other hand, a Quetta based newspaper quoting United Nations figures said that there were 18 million people with disabilities in Pakistan. About 9 million of them were women while 60 percent of them were youths.

Majority of youths were below 29 years of age and were facing issues physical and mental growth.

However, in Pakistan, instead of giving the people with disabilities rights, we even did not shy away from depriving them of their rights.

I have relative with myopia issue and he managed to enter a university on people with disabilities quota despite his physical fitness.

One day while narrating his tale of entering into university, he said that despite genuine persons with disabilities being in competition, he managed to win the seat through pulling right connections.

One wonders how can call depriving a blind or other person with disability from his right. Such a power could only be called as denial of their rights.

On the other hand, certificate of disability is a government document and for issuance of this document, government has setup medical boards all over the country.

In case of one having, disability certificates, one can get the benefit of quotas in education, jobs as well as financial aid. Similarly, a Pakistan Baitul Mal will also provide a wheelchair to a person with disability after he produces this certificate.

I think we need to acknowledge the disability with a way of life and should design special infrastructure for them.

We need to develop portions of footpaths which made it easier for wheelchair and or crutches while buildings should have ramps. In addition to this, we need to design toilets for people with disabilities and there should be a dedicated queue for them at shopping centers so that they can think of themselves as part of society.

What facilities do you think should be made available for persons with disabilities?

Mahreen Khalid hails from Bannu and associated with TNN as blogger and reporter.