PARACHINAR: Anwar Ali, 42, is pumping air through old-fashioned bicycle pump, and instead of water, the pipeline is full of air. After pumping more air pressure into the water pipeline, finally he received water and starts filling his plastic hand carry water container.

He belongs to Malana village near Parachinar city. The Tehsil Municipal Administration (TMA) has provided half-inch single water supply connection to 20 families. In Parachinar, the people don’t use bicycles but keep cycle pumps for putting air pressure in the water pipeline coming an average of five miles away from their homes. When air accumulates in the pipeline, it disturbs the water flow.

Anwar Ali and his family are not alone, for the last 10 years the entire Parachinar city and dozens of surrounding villages are facing severe water shortage in the valley.

This is happening despite dozens of natural streams, snow-covered mountains and river Kurram entering from Afghanistan into the green valley of Parachinar. Surrounded by a river, and streams, Parachinar valley is thirsty and the locals are spending hours in the queue waiting for their turn near a government tube-well to fill the hand carry water containers.

According Pakistan Bureau of Statistics (PBS) 2017 census the total population of district Kurram is 615,372, however, the upper Kurram tehsil, also known as Parachinar, consists of 252,436 inhabitants. 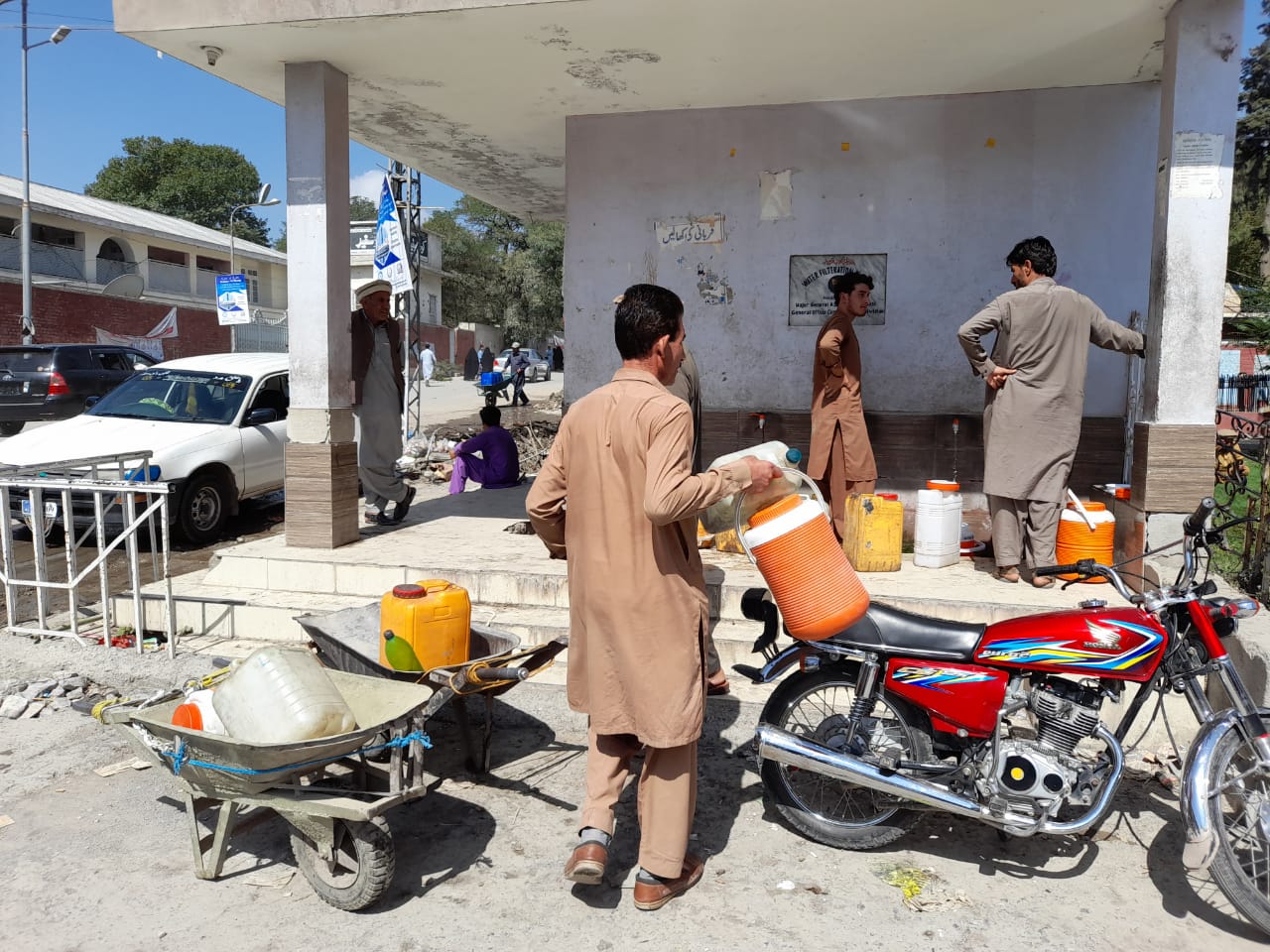 Tehsil Municipal Administration (TMA) is providing drinking water to government offices and the residents of Parachinar city. Before the independence, the British had installed water supply connections; with the passage of time as per population raises the local administration extended the water supply to the city.

According to the data received from TMA through Khyber Pakhtunkhwa Right to Information Act 2013, “The TMA has installed 1,500 water connections in Parachinar city. The water comes from three natural streams Gulbo, Foladi and Jabo in Malana village, while the Malikyar stream in Ziaran, both villages situated on the height. The water flows in the pipeline through gravity force and doesn’t require electricity.”

TMA has installed three tube-wells in the city to overcome the water shortage, but due to population raise the administration is unable to provide water supply connection to every house in the city.

Syed Hussain, 65, a resident of Parachinar city, says he witnessed many crises in the valley. He has ordered a container of water for his home, but he is not easy to pay cash to the container driver. This year he is more concerned about water. “In the winter, Parachinar didn’t receive snowfall as expected. Heavy snow on mountains and in the city is a sign of plenty of water in summer,” he said. 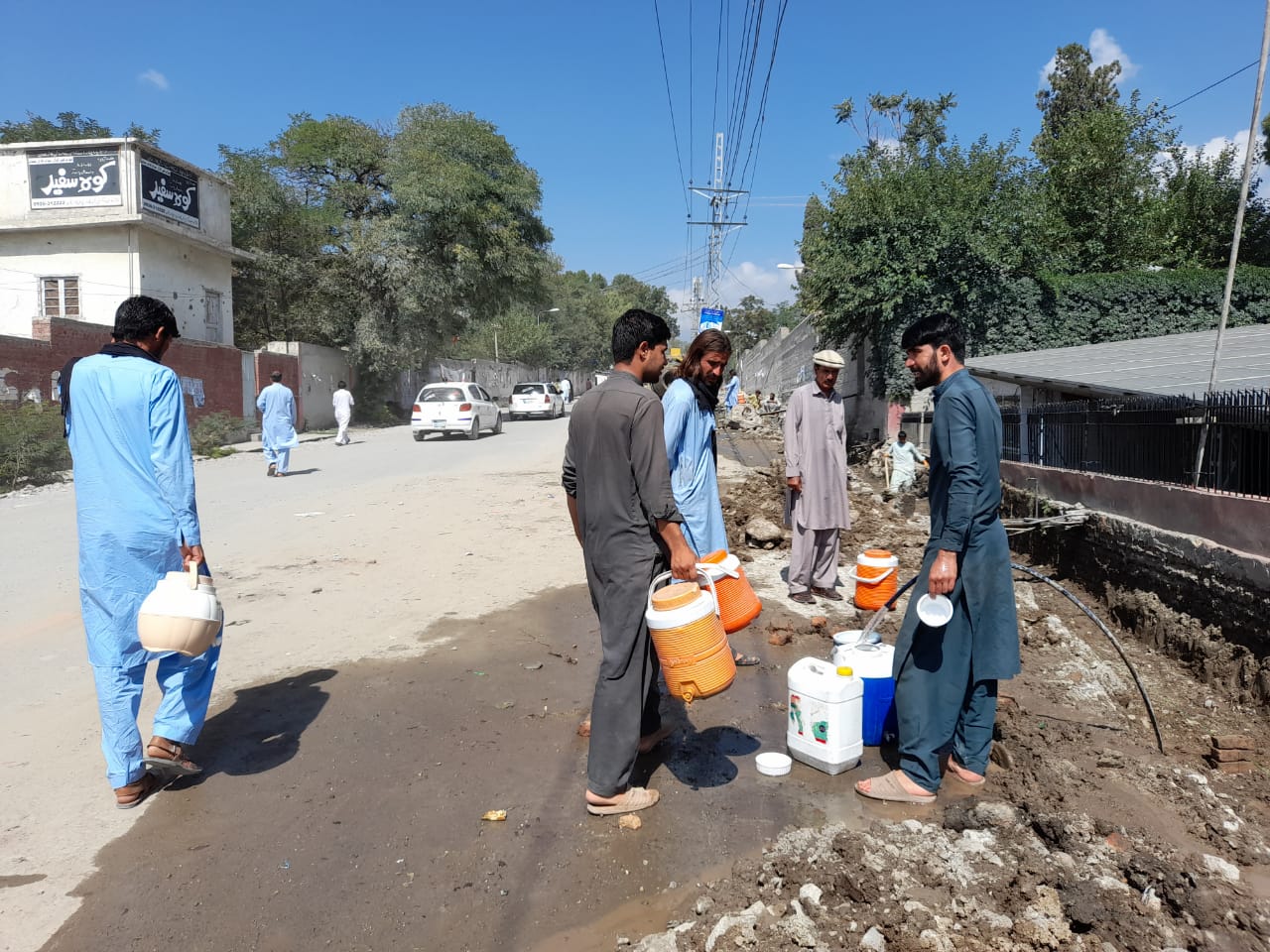 “The last winter was sporadic, now the residents are paying the price in summer. The people have no choice but to buy water containers, the price of the single container has reached 2000 rupees, the poor families are unable to buy drinking water,” he added.

Madam Akbar, Principal of Governor Model School Parachinar, said in summer we purchased three containers for school, it cost 3,000 rupees per day. “Now the local administration has provided a dedicated water connection to our school when we have electricity we store water, but the city is facing loadshedding,” she added. Madam has a house in Parachinar city. She says for the last 20 years those who can afford are buying water containers, but the children from low-income families pitch water from Imambargah and the government tube-wells.

As the water shortage became a serious issue in the valley, few people turned the crisis into an opportunity by establishing ten tube-wells. The owner of these tube wells sells water to the containers owners. There are more than 50 private water tankers operated in the city. If the tube wells run through electricity the owners charge 300 rupees per container, however, Parachinar is facing electricity load-shedding, when it runs on generator the owner’s charges 600 rupees per container.

Rajab Ali, 40, dressed in blue, looks tired. He has parked his tractor container and waiting for his turn to fill it with water. He owns a container for the last 17 years. “When people order for water, I charge them 2,000 rupees per container. The charges vary from the distance covered from the tube-well to the home. In summer, due to high demand for water, I earn 100,000 a month, but in winter the income decreases to Rs40,000,” he said.

In KP, hundreds of tube-wells have been operational illegally which is one of the reasons of dropping the underground water levels in the province. Due to climate change, KP is facing water shortage. To restrain water crisis in KP, the provincial assembly has passed “The Khyber Pakhtunkhwa Water Act 2020” with the aim to regulate, manage water resources in the provinces.

Nadia Bibi from Shalozan village says for the last two months the villagers are facing severe shortage of clean drinking water. “Pregnant women are pitching drinking water, although they are unable to carry heavyweight, the women have no other options, we have requested the village committee to fix the issue but they have no resources,” she said.

Parachinar city has harsh winter, where the lowest temperature recorded was -10 degrees centigrade. Syed Bahar Hussain, Tehsil Municipal Officer (TMO) and administrator of upper Kurram says during the winter due to low temperature the natural streams become dry and the city faces a water shortage.

Public Health Engineering Department (PHED) is mandated to provide potable water and sanitation facilities to the rural population and planning and construction of mega water supply and, sewerage and drainage schemes in urban areas of KP. According to data received from PHED through Right to Information Act, the PHED installed 5,475 water supply connections in different villages of Parachinar.

The TMA and PHED have installed a total of 6,975 water connections in upper Kurram, with a total population of 252,436. Arshad Hussain, Senior Engineer at PHED Parachinar, said it is clear that the majority of the people are taking illegal water connections from the main pipeline, which has intensified the water crisis in the city. The TMA has disconnected hundreds of illegal water supply connections in the city; however, no stern action has been taken against the violators.

Syed Hussain has been surprised with the record lowest snowfall in winter. He said in the last 60 years Parachinar has received the lowest snowfall in a season. “We haven’t seen such scorching summer in Parachinar. Normally we don’t switch on fans in summer, but this time it was unbearable for us. We don’t know the reason, but nature is very unkind to us,” he lamented.

Asif Khan, PhD in water and climate change from the University of Cambridge, says due to rapid industrialization, the world temperature has increased and “global warming” is the biggest challenge for the modern world. It has affected our temperature, changed our rain pattern, and reduced the winter duration.

“Global warming is the cause of the decrease in snowfall during winter. If we receive limited rains, and snow it will definitely affect our water cycle, it is the main reason for climate change and it is affecting our area,” Asif Khan said.

As per the latest research, as compared to the world the Northern Areas of Pakistan which also includes Parachinar and “Speen Ghar” (White Mountain, a range situated south of The Hindu Kush) temperature has been raised to double digit.

“The two-degree rise of temperature has affected our weather system. We’re facing intense rainfall which leads to flashflood. The intense rains don’t have the capacity to recharge our groundwater,” Asif Khan said.

Asif Khan said the groundwater level is decreasing because of downpours and unplanned tube wells for irrigation purposes; population growth is also the main factor in the decrease in groundwater level.

“The raise in temperature is the real cause of water shortage, high temperature means harsh summer, in which water consumption increases, humans, animals and even crops need more water,” Asif Khan further said.

Anwar Ali says he is the unlucky father living in a valley where water scarcity is common in every village. He and his other family members are unaware of the climate change consequences affecting their lives. “Sometimes I think, I will spend my whole life standing in line, waiting for my turn to fill my hand carry container,” Anwar Ali lamented.

Asif Khan says in November 2021, Pakistan will present its climate change policy in the United Nations Framework Convention on Climate Change conference expected to be held in Glasgow Scotland.

Asif Khan says the latest research on climate change indicates that the temperature in Pakistan and neighbouring countries will further rise; it would further affect the rain pattern in the region. The demand for drinking water will increase and can lead to water shortages in many parts of the country.

Under the KP Water Act, the government is planning to manage and regulate water and tube wells in the province. “With the cooperation of Syed Iqbal, member Provincial Assembly from Parachinar, the TMA has allocated funds in the Annual Developmental Program (ADP) to establish a dedicated water pipeline from Malikyar streams. After the implementation it will provide hundreds of clean drinking water supply connections to the residents of Parachinar city,” Syed Bahar said.