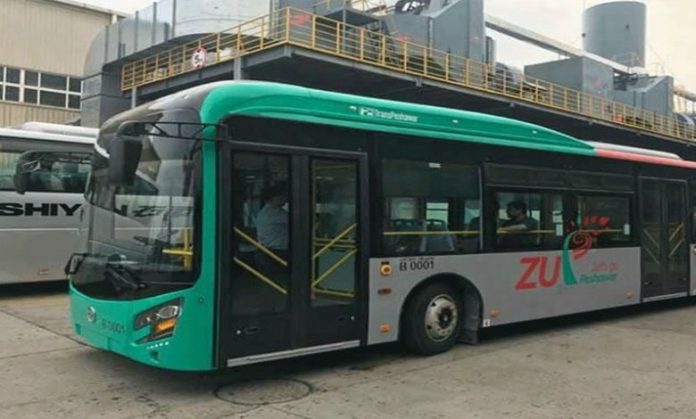 Peshawar Bus Rapid Transit (BRT) has turned into an easy target for protesters and other people agitating their grudges and demands to attack.

In several instances, locals agitating their various demands have attacked the bus service, damaged its property and caused inconvenience of thousands of people who use the service for their daily commute.

The history of such vandalism a bit longer and traced to back to attack on Sardar Ghari BRT station even before the launch of the service. The angry locals ransacked the station in protesting over the naming of the station and it was renamed according to the whims of the vandals.

The then Prime Minister Imran Khan inaugurated the bus service on August 13, 2020 and the very next day, protesters attacked the Hashtnagri station.

Sadaf Komal, spokesperson for the TransPeshawar, the government owned company running the bus service, said that the bus service runs from one end of the city to the other end.

She said that it was easier for citizens to access and the same ease makes it an easier target. However, Ms Komal said that targeting the bus service was citizens own loss.

She said that to address this issue, they have also charted a course of action. “We suspend the BRT service for some minutes whenever there is such issue,” she said.

She said that the service is resumed after some moments.

However, she added it was it was no one interest to suspend the service. “There is a three minutes gap between two buses arrival and suspension of service only causes discomfort to commuters,” she added.

She said that women badly suffered in case of service suspension.

A history of attack on BRT

The bus service has come under during protest against load shedding, demonstrations against Islamia College decision to proceed with online exams. Also on Monday, protest against dumping of headless body in Peshawar also led to the suspension of BRT service.

Rimal Ejaz, a faculty at the Kohat University said that intolerance among citizens was on the rise. She said that whenever people are enraged, they do not realize who they are hurting.

However, she said that it was citizens right to protest but no one should be allowed to block road and attack public infrastructure.

Ms Ejaz said that BRT has turned into easy target to attack as government has spent billions of rupees on the project. “Public has realized the hurt, which attacking the project causes to government,” she said.

She said that this was dangerous trend. Ms Ejaz said unless government punishes the vandals, attacks on the service would continue.

On other hand, TransPesahwar said that so far, no action has been taken against those attacking the project.

However, the company said that they have put their security on alert to thwart such attacks in future.