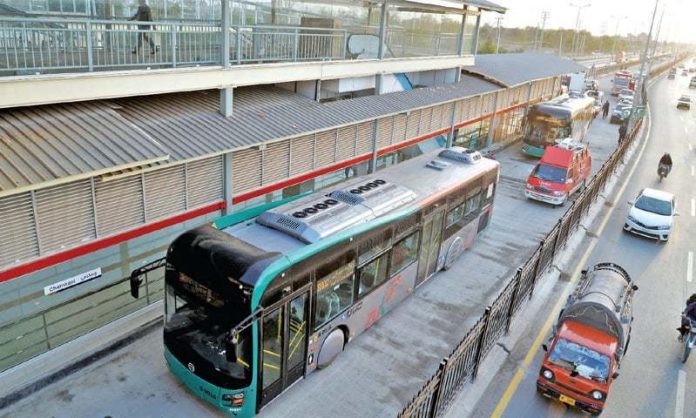 Shabnam, a resident of Peshawar enrolled in the economics department at the University of Peshawar in 2008 for masters. She used wagons and buses, which then were main mode of the transport in the provincial capital for her daily commute.

Ms Shabnam said that she used to face harassment in one or other form on daily basis in the private transport in overcrowded buses which even lacked designated seats for women.

Many a times, Shabnam used to stand in the bus to reach the varsity. Also a friend of her even quit her education due to the same issue.

However, he said that many women like her were very happy after the launch of the Peshawar Bus Rapid Transit, which has a dedicated portion for female commuters, where they can sit in a secure environment.

Former Prime Minister Imran Khan had inaugurated the BRT project in August 13, 2020 and TransPeshawar; a government owned company is running the bus service.

Sadaf Kamil, a spokesperson for the TransPeshawar said that 270,000 commuters used the bus service every day and 70,000 of them were women.

She said that about two percent of women population of the city used pre-BRT private buses; however, the same figure of women availing the BRT service stood at 20 percent at the end of first year of bus service. “At the end of second year of the operation, the number of women taking BRT has jumped to 25 percent,” she said.

Unlike other forms of private transport, every BRT bus 10 designated women seats.

Chanda Gul, a local said that the BRT has reduced her daily commute by 30 minutes as compared to the past. “In case of private transport, I was nearly always late to office,” she said.

However, some other women also point out that much is needed to done to secure their commute.

Rashmeen, a government school teacher told TNN pick pocketing was on the rise in the BRT buses. “Some days back, someone deprived me of Rs 8,000,” she said.

She said questioned how their commute was still insecure despite installation of CCTV cameras in every bus.

Similarly, Naeema Murad, a private school teacher, said that she had school fee collected from her students in her purse, which someone stole from her in BRT.

She said that she paid the stolen fee from her pay and was unable to help her parents besides facing hardships in meeting household expenditures.

She said that TransPeshawar ensures safe environment to commuters and they have installed security cameras at every station so address pick pocketing and other issues.

In addition to this, she said that annocuments were constantly made in buses to alert the commuters.

However, Ms Sadaf added that bus service faced huge load in the morning and evening time and in such a situation it even becomes difficult for security guards to control the situation. “Commuters need to take proper care in such a situation,” she said.

On the other hand, Ahmed, a resident of Yakatut said that BRT service did not benefit his area. He said that they had to walk considerable distance to arrive at stations. Besides, he said that the number of buses was small.

On the other hand, TransPeshawar spokesperson said that currently 158 buses were running on different routes while 62 more have also arrived. “These newly-arrived buses were undergoing registration, installation of equipment while new routes were also being planned and would be operationalized once these processes were complete,” she said.

On other hand, Israr, another local said that he avoided travelling in BRT as one cannot jump off it in case of any accident.

However, the BRT spokesperson said that buses rarely faced accident as they operated inside a dedicated corridor. However, she said that in case of accident on mixed corridors, buses faced delays.

She said that BRT was aimed at facilitating the public including women, differently able and women, who face problems in private transport.  Besides, she said that a TransPeshawar employed women in large number in management, call center, ticketing, security and inspectors.

However, Nazima, (not her real name), a security guard in the BRT said that previously she was employed at the private hospital and their pay was not deducted; however, the TransPeshawar makes deductions in case of taking day offs.

However, the BRT spokesperson said that TransPeshawar allowed annual leaves to its staff, just like other departments. She said that all contractors have their own policies and they allowed offs as per policy.

However, Ms Kamil said that TransPeshawar was equal opportunity employer and treated its employees without discrimination.

She said that the company also strived to provide a better environment for its female employees as it did for female commuters. “Protection of female employees is our foremost responsibility,” she said.

Ms Kamil said that the company allowed three months maternity leave to its female employees and no deduction is made from their pay. Besides, she said that they also provide good environment to its employees including separate staff, common and prayer rooms for women employees.