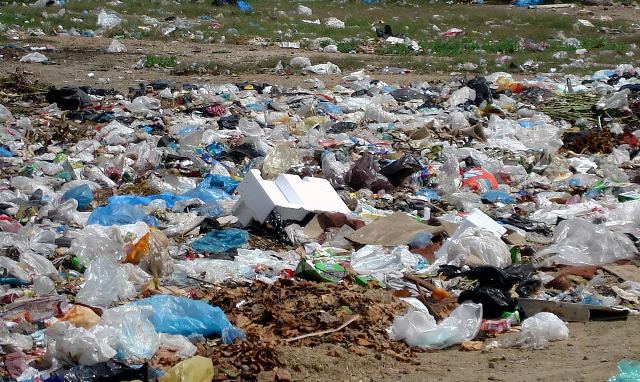 The ever-increasing use of plastic is destroying the earth’s ecosystem. According to a report about 100,000 animals due to the adverse affects of plastics bags alone.

Similarly experts also term the plastic bag as most dangerous object for the earth while the utensils made out of plastic are extremely dangerous for human body. Eating in plastic utensils could lead to the tiny particle of plastic into human bodies.

The plastic industry started in the US in 1950s and it has generated over 8.3 billion tonnes of unnecessary waste so far. Only nine percent of plastic is recyclable.

On the other hand, World Health Organization (WHO) has stated that after turning the earth into a dump, plastic has now entered human bodies and every adult was ingesting 50,000 particles a year.

The adverse affects of plastic bags and utensils

Dr Hizabullah Khan, a faculty at the environmental science department said that using plastic utensils was extremely dangerous as people do not know which type of plastic has been used for making them.

He said that there neither standards for such plastic ware nor any authority to check them. “Plastic made out of polymers could be turned into any shape,” he said.

Dr Khan said that plastic is made out of several chemicals including bisphenol-A BPA. However, he said that any kind of types does not cause harm immediately; however, their regular use was injurious for human health.

“Plastic was not suitable for household use,” he said.

He said that use of plastic bottles and containers was very common in Pakistani households. Besides, he said not only hot food was poured into plastics containers but they were also heated in microwave ovens.

“Heating up a plastic container mixes its particles with food which later made its way into human body,” he said.

Dr Khan said that It was kind of slow poisoning and could lead to cancer and other illnesses.

He said that regular use of plastic utensils could cause health hazards. He said that Bisphenol-A BPA was a dangerous product and could cause breast, stomach and colon cancers.

He said that no type of plastic was suitable for human health as they can transfer microscopic particles into our bodies by ingesting, breath and touching such wares.
Dr Khan said that though government has time and again banned plastic bags; however, the manufactures protests have always led relaxation of such bans.

“The manufactures always say that they will start making biodegradable bags after exhausting their existing stocks.

KP government under its environmental vision had decided to ban the plastic ban under the KP Environmental Protection Act Amendment Bill 2022.

Najeebullah, a Peshawar Saddar trader said that people should bring sacks made out of clothe with them to put an end to use of plastic. However, he said rarely people carrying cloth sack come to bazaar for purchasing their household shopping.

Mr Najeeb said that government should strictly enforce the ban on plastic. However, he said that in order to do so, regular checking by administration was an imperative.

Under the law, those violating ban on plastic bags can face imprisonment up to a month and fine of Rs 500,000. The amended legislation has also empowered special magistrates to take action against the violators.