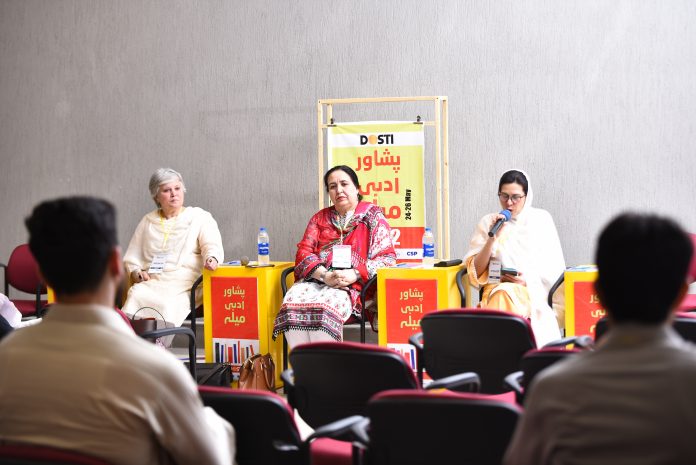 On the second day of the first edition of the Peshawar Literature Festival 12 sessions on different subjects took place on Wednesday.

A statement issued here said that a large number of participants took part in the session, which discussed women empowerment in Khyber Pakhtunkhwa, dimensions of ethnic politics in the country, opportunities and challenges of literary industry in the province, current situation of the Afghanistan as well as the Pakistani fiction among others attracted a large number of students and literati.

In a first, PLF also held English poetry recital, which was attended by a large number of poets. In animated discussion took place among the poets, which was moderated by the Spogmai Khattak. Former Chief Secretary KP Sahibzada Riaz Noor, Riaz Hussain, Samra Fakhar, Saira Babar and Noman Bin Saleem took part in the discussions, which discussed the impact of the violence in the poetry among other issues. Mr Noor in response to a question said the title of his anthology Dragonfly and Other Poems derives its inspiration from the drone warfare in the region during the war on terror. He said that Waziristan locals used to equate drones with dragonflies due to its whizzing sound, from which his collection drawn its name.

The poets also debated the cathartic value of the poetry as well as the challenges and other issues of the writing in another language as well as their own perception of Pashto poetry.

The statement said that that author including Dr Fazal Rahim Marwat’s Khushal Khan Khattak, the Pioneer of Afghan Nationalism and Ihsan Dawar’s Waziristan Ka Saqafati Virsa were also disused in great length. In addition to this Zafarullah Parwaz, author of first Khowar novel Angristanu also spoke about his book in a session which was moderated by the Fakhar Alam.

Dr Aamer Raza moderated the session on current perspectives on Afghanistan where Dr Irfan Ashraf and Dr Khurshid Khan were the panelists.

Dr Darwaish Afridi moderated the session on Class or Ethnicity? A Question of Political Relevance in Pakistan, which was attended by Afrasiab Khattak and Dr Aasim Sajjad Akhtar and attracted a large number of students.

Dr Noreen Naseer moderated the session on Empowering Women in KP, which the KP Ombudsperson on Harassment of Women Rakhshanda Naz and former MNA Bushra Gohar attended.This session also attracted a large number of students and other audience.

In addition to Urdu and English handwriting competition were arranged for school children and students from several schools took part in the competition. In addition to this, Urdu debate completion will take place on last day of the event on Thursday.

The first edition of PLF has been organized by the Institute of Education and Research, Community Service Programme and the Department of History of the University of Peshawar in collaboration of the Dosti Welfare Organization.

Another 15 sessions are planned on the concluding day of the festival on Thursday.