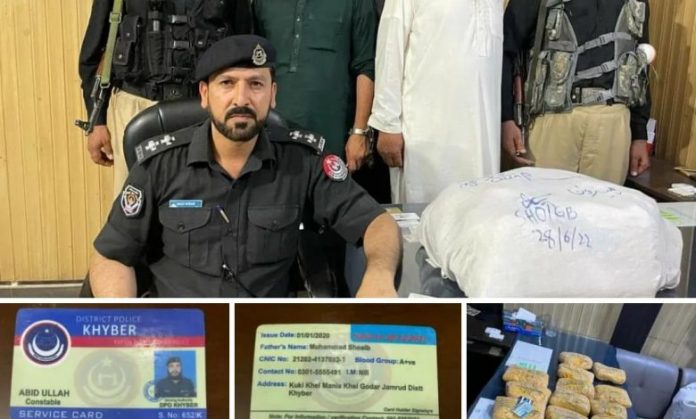 Peshawar police has arrested the Station House Officer (SHO) Mullagori police station of Khyber district along with his constable son while attempting to smuggle over 13 kilograms of heroin.

SHO Mullagori Muhammad Shoaib and his son Abiduallah were arrested with over 13 kilograms of heroin in their vehicle on Tuesday near Pir Zakori flyover in the eastern part of the city.

Following the cop arrest with huge amount of heroin, Capital City Police Officer Muhammad Ijaz Khan suspended SHO and his son. City police chief said that there was no place for black sheep in police department.  He also ordered initiation of departmental action against the official besides the criminal proceedings.

Earlier on Monday, police had also arrested a cop belonging to to Agha Mir Jani police station of provincial capital on charges of paddling heroin to drug addicts across the city.

Police identified the cop as Fazalur Rehman and recovered about 300 packets of heroin from his custody, which he was selling to drug addicts.