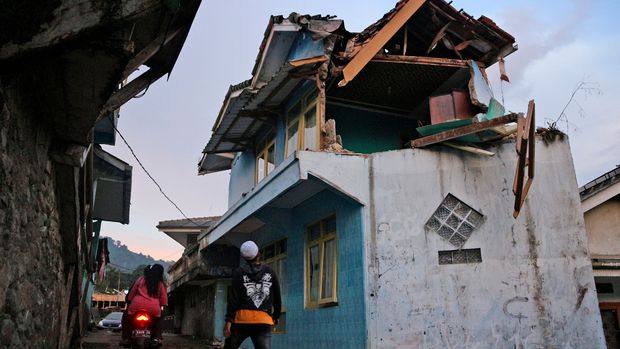 A powerful earthquake of 5.6 magnitude has jolted West Java province of Indonesia, killing 162 people and injuring over 700 others.

The tremors were felt as far as Indonesian capital Jakarta.

US Geological Survey said that epicenter of the earthquake was in Cianjur town in West Java; about 75 kilometers form Jakarta at a shallow depth of 10 kilometers.

West Java governor confirmed 162 deaths and over 700 injuries. Besides, he said that over 2200 houses were also damaged in the earthquake.

Officials said that relief activities were currently underway in the area and locals have been cautioned about the aftershocks as well. In addition to this, rescuers were searching people who could be trapped beneath the rubble.

The earthquake has also rendered over 5,300 homeless besides disrupting electricity supply and other communication systems. In addition to this, many people are trapped in earthquake affected areas due to landsliding.

Local media reported that the earthquake tremors were felt for about three minutes in Jakarta and several of them were also evacuated as well.

It is pertinent to mention here said that the Indonesia is located in the earthquake and volcanoes prone area known as ring of fire in Pacific. A 6.2 magnitude earthquake had killed 25 and injured 460 others in Western Sumatra.

Earlier in January last year a 6.2 magnitude earthquake in Sulawesi province, killing more than 100 and injuring over 6500 others. Besides, Indian Ocean Tsunami of 2004 had killed over 120,000 people in Indonesia.