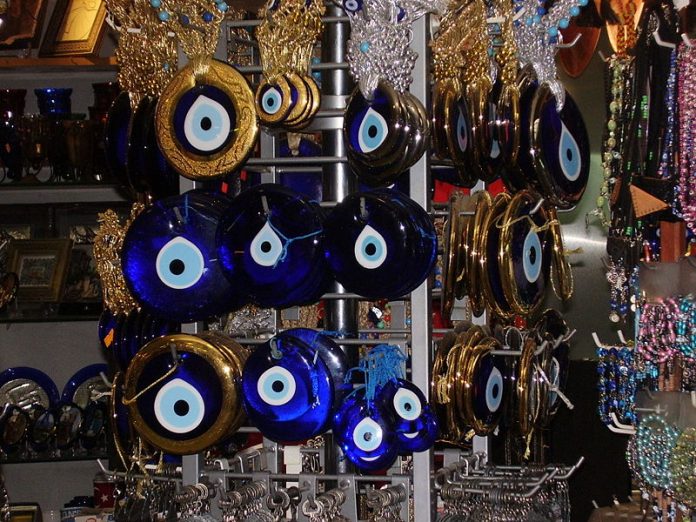 My aunt was cheerful when she became the grandmother of a grandson after five granddaughters. She did his aqeeqah, that she had forgotten to do at the time of her granddaughters, not once but five times.

Now it was imperative to introduce the new born baby to the family.

When I reached to see the infant, I saw a big black stain on the little forehead of the baby. I was irritated and asked my aunt that why did she put a black stain on the cute baby so that he will not look adorable. She said it is to save him from evil eyes. I asked why would I look at someone with evil eye who is just a few days old, and if she was fearful of evil eye then why did she even call everyone to see the baby? This time she gave a strange reasoning, that evil eye can be caused from the sight of love of our loved ones as well.

Is loving equivalent to bad eyeing?

One question came to my mind instantly that why is my aunt trying to protect her grandson from love?

Let’s assume that evil eye is real but how can love cause evil eye and how is a black stain a solution for that.

Upon asking my aunt about this, she replied that religion also mentions about evil eye. Other than this, she had no answer.

I believe superstition has a profound impact on human life. It is so deep that we place our fear and hatred on the face of a child like a medal when he is born.

Then he looks at every loving eye with suspicion.

This black spot then grows in the form of tough training with the love of parents till death.

To be honest, I really like the color black. Nonetheless, I don’t understand what kind of sin it has committed that in the traditional societies of the sub-continent, it has been declared as a shield of protection from evil eye.

Since the sight of love and goodness also causes evil eye, therefore, black color is used in multiple ways to be protected from evil eye, such as marking a black spot on a new born or tying black piece of cloth on a new house or new car, as well as breaking a black vessel in front of the bride’s car. Humans have put all the lifesaving responsibilities on black color.

You also need to take responsibility as most of the time a child becomes sick due to the carelessness of adults or from the effect of evil eye?

Similarly, most of the problems are often encountered by accidents rather than by evil eye?

Try to acknowledge accidents, mistakes and shortcomings, and attempt to eliminate them instead of looking with suspicion and hatred towards a little human so that he remains safe from evil eye.

A society allergic to love

The societies allergic to love and humanity are born and flourish under the shadow of the immortal bull of such hatred.

The black spot of hatred is put on our foreheads at birth, as a consequence of which we spend all our lives believing in this hatred and trying to defeat it.

Sometimes by taking the name of religion and sometimes by associating it with the wisdom of the elderly.

Now one should question what inventions have been made by the elderly, who are enslaved to these outdated traditions, which are a testimony to their wisdom. They have only invented this black spot, actually the spot of hatred.

Do you also agree with the practice of wearing a black spot?

Nosheen Fatima is a social worker and blogs on various topics.