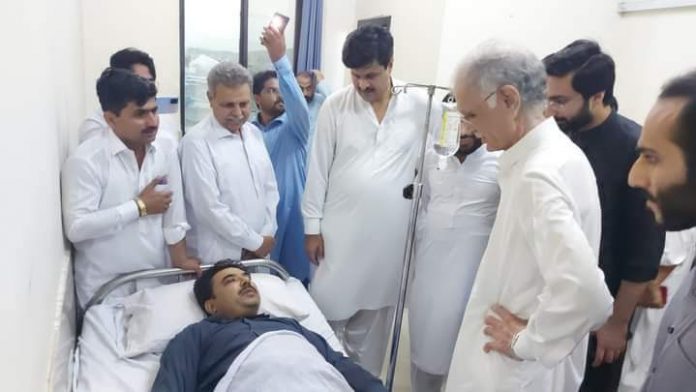 Two people were injured when unknown motorcyclists opened fire on a local politician in Nowshera district when he was on his way to attend a public meeting to join the ruling Pakistan Tehrik Insaf (PTI).

The politicians were identified as Motasim Billah who along with his brother Mansoor was wounded in the firing. Mr Billah had recently quit the Pakistan Peoples Party and scheduled to join the PTI in a meeting later in the day.

Police said Mr Billah and his brother were on their way to Pir Sabaq area of the district to attend a public meeting, where he had to formally join the ruling PTI.

However, unknown motorcyclists opened fire on their vehicle, leaving both of them injured. The injured were admitted to the Qazi Hussain Ahmed Medical Complex while Nowshera Cantt police has registered FIR and started investigations.

Both of them are said to be out of danger.

On the other hand, PTI senior leader and former Chief Minister Pervez Khattak condmned the attack on Mr Billah and his brother and he went to the hospital to inquire about their health.

Earlier a PTI MPA from Lower Dir Malik Liaqat Ali Khan also attacked on late on Saturday, which left four people including the lawmaker brother and nephew dead along with two security guards. The MPA and four other people were injured in the attack.

The firing took place in the Lal Qillah area of Maidan tehsil of the district.