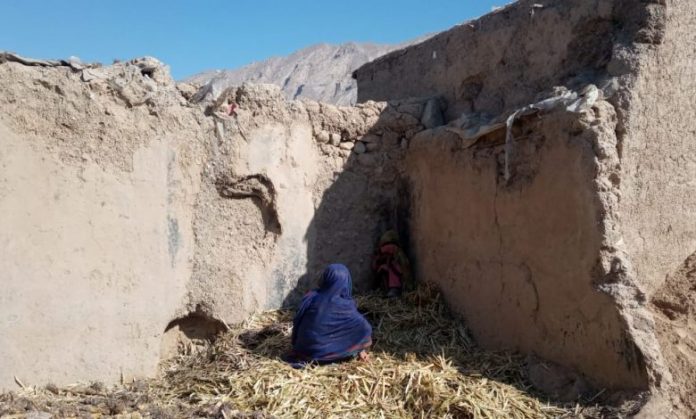 Quetta’s Qadirabad neighborhood also suffered heavy damages during the August as large numbers of houses were destroyed due to raging torrents and now locals are facing problems with onset of winter.

Balochistan province has suffered heavy losses in the floods as thousands of houses have been destroyed.

Murad Ahmed, a Qadirabad resident told TNN that four rooms of his house were destroyed in the floods and now his family was living in a tent. “My house walls collapsed after the flood waters entered my courtyard,” he said. Murad said that he shifted his family to a neighbor house and then started repairs his houses after the water subside.

He said that they have not received anything from authorities; however, non-governmental organization provided two steel beams and eight bamboo pieces, which were insufficient for their houses.

“We are facing several problems with the onset of winters in the absence of electricity and gas,” he said.

He said that their kids gather paper and garbage throughout the day, which they were using for heating and cooking purposes.

Balochistan Provincial Disaster Management Authority (PDMA) report earlier this month stated that there were 8500 houses were completely destroyed in summer floods while 10,200 others were partially damaged in Quetta.

Abdul Sakhoor, a Quetta based social activist said that there were 350 families living in Qadiarabad and floods destroyed 95 percent of houses in the village. However, he added that survey for the construction of these houses was currently in process.

He said those who can afford were working to rehabilitate their residences while those lacking means were waiting for the government.

He said that majority of town residents were poor and could not afford two square meals a day. Shakoor said that winter will pile more and more miseries on them. “They have nothing for heating while edibles are really expensive,” he said.

He said that many of the village occupants were picking garbage to earn their livelihood and they could not even purchase a bag of flour. “They are dependent on garbage picking for their livelihood,” he said.

Besides, he said that the toilet issue was a major problem for the Qadirabad residents as the rains and floods destroyed 90 percent of village restrooms. “Women and elderly were facing great problems due to the absence of washrooms and people were becoming sick,” he said.

Nisar Ahmed Langoo, assistant commissioner Quetta told TNN that they have shared the details of flood damages with the federal government and awaiting the center’s response.

He said that they will start disbursing the money as soon as they receive it after center’s approval. “Currently this issue pending at the center,” he said.

The officer also said that he was in touch with the PDMA to arrange warm clothes and blankets for the flood affectees in winter. However, the locals on the other hand said that they have not received anything from authorities.