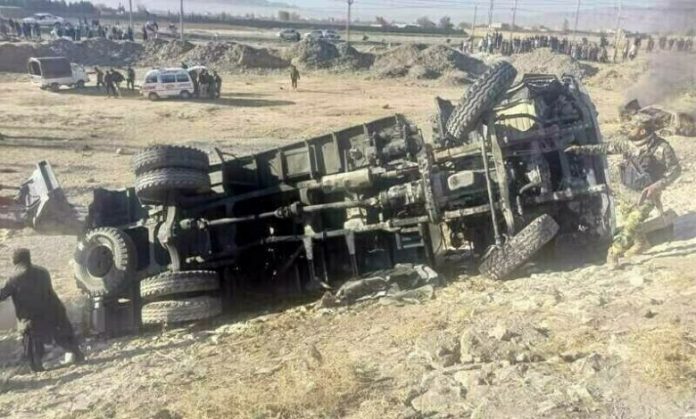 QUETTA: Two persons were killed and 24 others including 20 policemen were injured in a suicide attack on Balochistan Constabulary vehicle on Kuchlak Bypass in Baleli area on Tuesday.

Media reports said that the suicide bomber targeted the police truck on Kuchlak Bypass. The police personnel were on their way to polio duty. Police cordoned off the area following the attack.

Besides, fire brigade and ambulances also rushed to crime scene while bomb disposal unit was also called to sweep the area.

Police officials said that a passerby woman in a car was also injured in the blast.

The injured were shifted to the Civil Hospitals Quetta for treatment where two of the injured including a cop and a child succumbed to their injuries.

DIG Quetta Azfar Mahesar confirmed that it was suicide attack. He said that about 20 to 25 kilograms of explosives were used in the attack. Besides, he said that the Quetta city’s security has been beefed up after the attack.

On the other hand, federal interior minister Rana Sanaullah condemned the suicide attack and expressed his sorrow over the loss of life in the attack.

The interior minister also directed the Balochistan government to submit a detailed report regarding the attack.

He also paid tributes to the police martyrs and said that entire nation was proud of their sacrifices.