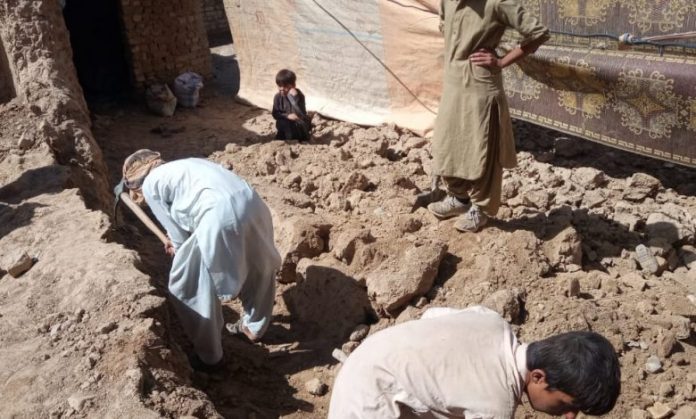 More than three months after devastating floods laid waste to the Naway Killay area on the outskirts of Quetta, the reconstruction of damaged houses is yet to start.
Locals told TNN that government teams surveyed the area following the floods; however, so far nothing has been done to rehabilitate the flood affected and reconstruct their destroyed houses.

“We are facing hard time due to Quetta’s severe winter,” they said.

Asghar Khan, a local told TNN that his house was destroyed in the floods and now he was facing tough time in winter.  He said that despite the survey teams visiting the area, they have not received any aid so far.

“Quetta winter is very severe and flood affected people are waiting for the government to be able to reconstruct their houses.
Asghar said that his house was completely destroyed in the floods and currently has even no covered space to sit-under. “Government provided tents and other facilities to locals in other areas; however, people of Naway Killay neither received tents nor promise of houses reconstruction was met,” he said.

He said that authorities had promised to reconstruct their houses within a month.

On the other hand, Provincial Disaster Management Authority (PDMA) spokesperson Maqbool Jaffer said that currently non-governmental organizations were in the reconstruction phase while government’s rehabilitation phase will start soon.

“Center and province are coordinating about this process,” he said.

He said that the recently officials of planning division delegation visited the province and they agreed to construct flat type houses in 11 districts of the province, which will greatly help locals.

On the other hand, despite government province of spending Rs 8 billion on rehabilitation of flood affected people; many of the flood victims are still waiting for government aid.