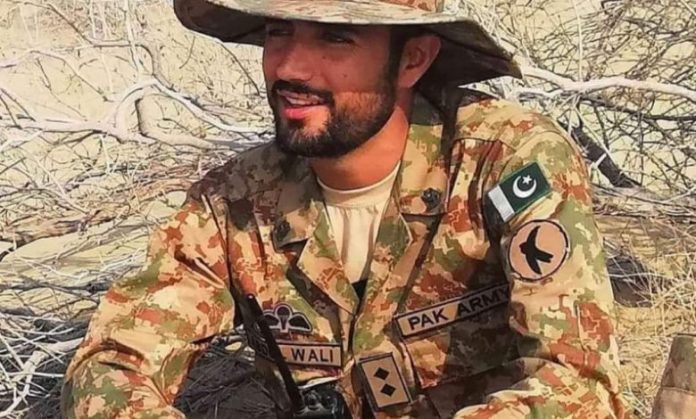 Capitan Abdul Wali Wazir who was laid to rest to in his ancestral town of Wana area of South Waziristan was known to all as a thorough gentleman.

Akhtar Ali, brother of martyred officer told TNN that his brother even used to help their mother with household chores whenever he was on vacations. “He also used to go out with her for work,” he said.

He said that they were not sad over the martyrdom of his brother; rather, they were proud of it. “Even locals are congratulating us over my brother’s martyrdom,” he said.

Captain Wali had done his intermediate from Wana Cadet College and obtained a commission in Pakistan Army and trained at the Pakistan Military Academy.

He was in military for past seven years.

Captain Wali had married some two years ago; however, he had no children. He has survived by six sisters and five brothers.

Mr Ali said that his brother was really passionate about military and he always talked about doing something for his country. “He laid his life for his country,” he said.

Mr Ali said that they were really proud over his martyrdom. “Previously we used to take pride in being brothers of a military officer and now feel pride being family members of a martyred officer,” he said.

Mr Ali said that his brother had visited his home some days before his martyrdom and spent two weeks with family. On the day of his martyrdom, he talked to his father and asked him to pray for them as they were going on an operation.

Mr Ali said they came to know about his martyrdom from one of cousins who had seen such reports on social media. “After this we called Captain Wali number which was picked up by his colleague who confirmed his martyrdom,” he said.

Mr Ali said that then they informed the family males; however, kept the news from women.

He said that when we broke the news to family women, then the grief enveloped our household. “We will never forget the day of my brother’s martyrdom,” he said.