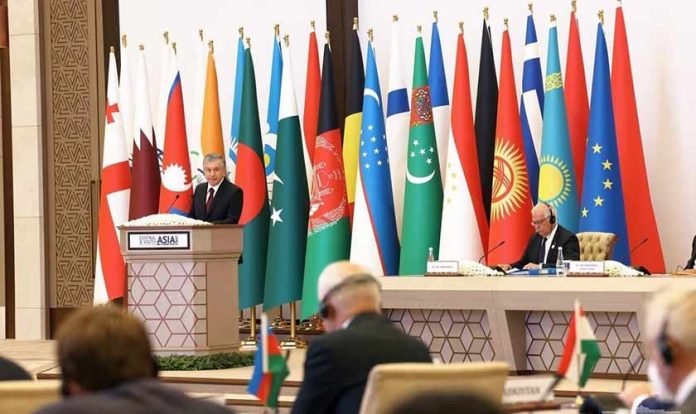 In the world of globalization, regional connectivity and integration is the essential component for the development and prosperity of any nation. It is more applicable on the two regions; South Asia and Central Asia which have many commonalities such as shared traditional and cultural linkages, history, sense of belonging, same past with colonial rule and civilizational similarities.

Visionary leaders think beyond their countries’ borders, their focus don’t confine to only bolster the economic progress and enhance the security of their own countries, but they prioritize collective and mutual advantage and for that purpose they strive to connect people, nations and regions to attain this objective. Uzbekistan’s President, His Excellency Shavkat Mirziyoyev, is one of the ‘Visionary Statesman’ (Akram, 2021) in the contemporary world.

In July 2021 Uzbekistan hosted an international conference under the agenda of “Central and South Asia: Regional Connectivity, Challenges and Prospects” at Tashkent which was attended by numerous delegates from across the world. The conference was attended by Prime Minister of Pakistan Imran Khan, former President of Afghanistan Ashraf Ghani, President of the Republic of Uzbekistan, foreign ministers of South and Central Asian countries, heads of different international organizations including UN General Secretary Anto’nio Guterres. “PM Imran Khan and former President of Afghanistan Mr. Ashraf Ghani were guests of the honor”. (Khan, 2021)

The regional connectivity idea proposed by His Excellency President Shavkat Mirziyoyev is one of the milestone steps towards peaceful and prosperous future of both the regions. According to Dr. Khalid Taimur Akram director Center for Global and Strategic Studies Islamabad, “that after World War 2 the world has passed through a significant developments such as the formation of United Nations in 1945, the collapse of Soviet Union in 1991, the establishment of European Union in 1993 and the gigantic OBOR initiative by China in 2013.” The fifth milestone development which has been initiated by His Excellency President Shavkat Mirziyoyev is the regional connectivity between the two prominent regions.

The economic cooperation envisioned by His Excellency President Shavkat Mirziyoyev can transform both the regions. This objective can be achieved by trade, commerce, innovation, infrastructure projects, investment, and railway lines etc. Like One Belt One Road initiative connects Asia with Europe and African continent, (Farr, 2017), the South and Central Asia connectivity strategy is likely to play its role in improving regional integration, boosting trade, and stimulating economic growth. The President has categorically iterated that the connectivity agenda is based on mutual cooperation not competition. He has stated that “it is also compatible with the objectives of the BRI” (Seyfettin, 2021) by Chinese President Xi Jinping.

This initiative by president may prove helpful in connecting the people, reinvigorating the traditional and cultural linkages between the two regions, integrating finances, and developing new avenues for further improving the relations between them.

The trade and commerce between the two regions can help build trust and trust leads to the expansion of trade. In return, relations grow warmer and trade barriers are lifted, regulations are eased, and travel and tourism increase. The two regions has vast potential of tourism which is likely to play a tremendous role in building better relationships between them. Millions of people in both the regions can benefit from the connectivity-through-tourism approach.

Connectivity is indispensable for the development of any region. In this regard the President of Uzbekistan, His Excellency spoke to the participants of the conference that “Without tighter relationships and economic connectivity, we can’t turn this part of the world, and the Eurasian continent, into a stable and prosperous space.” (Khan, https://t.co/2UcPEHpyJz, 2021)

The connectivity will allow the regional countries to freely transport their goods and commodities and make exchange of people easy and less costly. The regional connectivity between South Asia and Central Asia will reduce the distance between the two regions which will ultimately reduce the costs of the transportation, which will have a positive impact on the economies. It will help boost the economies.

In the changing dynamics of regional and international political discourse nations need to adopt to the prevailing circumstances by joining hands in hands to tackle problems. Moreover, nations act together when there exist a convergence of interests among them. This is what President Shavkat invigorates in his policy to expand trade and economic partnership between Uzbekistan and South & Central Asian countries. Countries in both the regions have; to wipe out poverty, deal with the common threat to their national security, eliminate terrorism, halt religious extremism, overcome illiteracy and unemployment, and transnational crimes. This objective can be best achieved by cooperation between the regions in multiple fields.

The grand initiative by His Excellency is not only about regional cooperation and integration, but it is about shared future. It is a window into the future, a future between the two regions in which South and central Asia are likely to cement their relations via trade, investment, and economic partnership which will hopefully bring them into a massive (free) trade zone culminating in prosperous and developed regions.

Afghanistan is the main juncture between Central Asia and South Asia. “The Fall of Kabul and the ascendance of Taliban into power has jeopardized the balance of the entire region.” (Khan A. U., 2021). Stability and peace is the key to development. Peace in Afghanistan is mandatory for connecting the two regions. Without peace and stability in Afghanistan, circumstances cannot be conducive for trade and cooperation. It is the shared responsibility of every state of both the regions to play its role in mediating among the various afghan factions, currently at odd with the new Taliban regime, and form an inclusive government.

His Excellency President Shavkat has conveyed to the regional countries that a peaceful and stable Afghanistan is in the vast interest of the region and beyond. He has urged the world community to act proactively to rebuild the war-torn country. Uzbekistan was among the four countries; “the United States, Pakistan, Afghanistan and Uzbekistan which agreed in principle to established a quadrilateral diplomatic” (Department, 2021) forum to deal with the Afghan Peace Process and to peacefully resolve the afghan problem.

The transportation infrastructure is one of the essential elements of connectivity. No country or region makes it possible to improve relations without establishing connections via roads, railways and sea routes. “The Mazar-e-Sharif-Kabul-Peshawar” railway line which connects the South Asian countries with central Asian countries through Afghanistan (Hashimova, 2021) is a milestone development between Pakistan and Uzbekistan which will provide access to Uzbekistan to Pakistani ports and seas. It will reduce the long distance and set the prices of goods and commodities very reasonable.

Prime Minister Imran Khan has endorsed the initiative and praised the President for his grand initiative. Pakistan has assured its full support for achieving the objectives of the initiative.

The objectives of the connectivity initiative can be best achieved if the countries provide exchange programs for students, researchers, academicians and scholars of other countries. Cultural exchanges among the countries may prove quite helpful in enhancing cordial relations among them. SDGs must be the priority of every Asian state to improve the lives of their citizens.