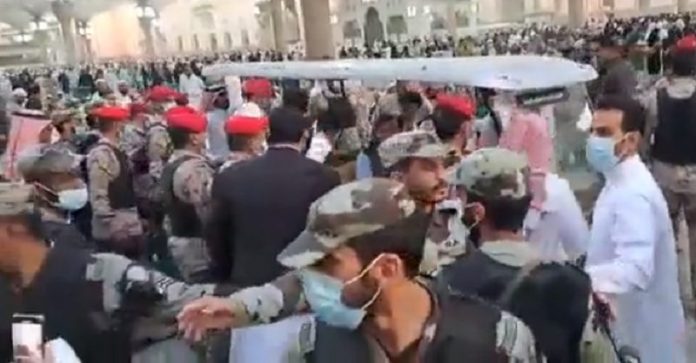 A Saudi court has sentenced six Pakistani nationals to from eight to 10 years in prison for violating the sanctity of the Masjid-e-Nabawi.

Pakistani nationals were charged for chanting slogans inside the second holiest mosque of Islam during the visit of the Prime Minister Shahbaz Sharif.

Media reports said that three of them have been given 10 years imprisonment while three others faced eight years behind bars.

The reports said that Anas, Arshad and Muhammad Saleem have been sentenced to spend 10 years behind bars while Khawaja Luqman, Muhammad Afzal and Ghulam Muhammad have been jailed for eight years.

The court also fined the accused 20,000 Saudi Riyal each and also confiscated their phones.

The court sentenced the accused after the allegations of sloganeering against the federal minister for information and broadcasting Marriyum Aurganzeb and other ministers during the visit of the Prime Minister to Saudi Arabia earlier in April this year.

The ministers had had faced rowdy behavior in the courtyard of the mosque and abusive language was used against Ms Auranzeb while Jamhoori Watan Party (JWP) chief Shah Zain Bugti was pushed.