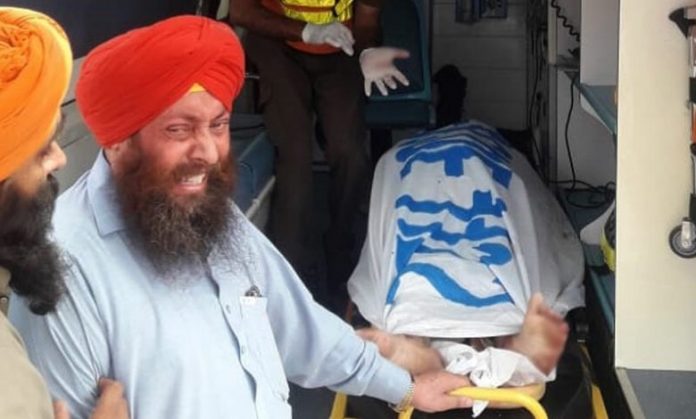 The recent killing of two Sikh traders in Batatal area on the outskirts is giving the minorities particularly Sikhs sleepless nights.

Two of the slain traders’ brothers have shifted to Punjab province after the killing while many other of the community are planning to leave Khyber Pakhtunkhwa (KP) for good.

Earlier on May 15, unidentified assailants shot dead Mr Kanwaljeet Singh and Mr Ranjeet Singh, belonging to Jogan Shah area of Peshawar city, near their shops in the Batatal area of the city close to the border of the Khyber tribal district. Terrorist Islamic State-Khurassan chapter had claimed responsibility for the murders.

Following the murders, slain Ranjeet Singh’s two brothers have shifted to Lahore, capital of Punjab province. One of them, Narendra Singh, 28 said that following the murder of their elder brother, his father directed both brothers to immediately leave KP and shift to Punjab.

Mr Narendra said that his father was very much scared for their wellbeing saying that he could not bear another loss.

He said that his slain brother had been survived by three daughters and two sons and youngest son was four years old. “The youngest child is pining to see his father every day and his situation breaks our heart every day,” he said.

He said that perhaps this was the reason his father asked them to shift to relative secure place.

The Sikh family originally belonged to Tirah area of Khyber tribal district and shifted to Peshawar about 15 years ago. Following their arrival in Peshawar, Mr Narendra’s father and elder brother opened a general store and spices shop in Batatal.

“We used to live with our Muslim brethren in both the Tirah Valley and Peshawar and we have never done anyone harm,” he said.

He said that they were still at loss as to why both the Ranjeet and Kanwaljeet were murdered. “Ranjeet was so much in love with Muslims that he always used to give discount to them in Ramzan,” he said.

There are about 10 to 12 shops owned by the Sikh traders in the Batatal Bazaar. The Sikhs traders opened their shops after keeping their shutters down for a couple of days after the murder of two of their colleagues.

Ranjeet Singh’s shop has been taken over his father; however, kanwaljeet’s relatives closed their business and stopped doing business.

Though the Sikh population of KP was not counted separately in 2017 Census; however, Baba Jee Gurpal Singh, a resident of Peshawar claimed that there were 1100 Sikhs families in KP.

He said that the total population of the Sikhs was about 25,000 to 30,000 people with majority of them living in Peshawar.

In recent past, many Sikhs families were living in Khyber and Kurram district; however, majority of them shifted to Peshawar due to the security situation.

Majority of those who have arrived recently in Peshawar have started to live in close vicinity of the gurduwaras; however, most of them still fear for their lives.

Targeted killings of Sikhs in KP

First incident of targeted killing of a member of Sikh community of KP took place in January 2014, when unidentified attackers shot dead Bhagwan Singh at his medical store in Tangi area of Charsadda district.

Radesh Singh Tony, Chairman Minority Rights Forum Pakistan said that 24 Sikhs have been killed in KP since 2014. Mr Tony said that there has been no progress even a single case of Sikhs murder.

He said that as Sikhs were easily identifiable among minorities due to their distinctive headgear; therefore, they were falling prey to the targeted killings.

Mr Tony said that due to this reason, Sikhs community was apprehensive about their security in KP and shifting to Punjab.

He said that even police has put the recent killings in the cold storage after the IS-K claimed responsibility for the murders. “There has been no progress in this case,” he said.

Mr Tony said that earlier in 2014 Justice Tassaduq Jillani in his judgment regarding minorities’ rights in country had directed the authorities to take immediate action after such attacks.

However, he added that police reaction to killing boiled down to securing the bodies from crime scene and handing them over to the relatives after postmortem.

Mr Tony said that Supreme Court had also directed for setting up a special force for the protection of minorities; however, no such force could be constituted even after passage of eight years.

Ashwani Kumar, Balochistan National Party’s provincial finance secretary said that some of the minorities’ youths has been hired into police for protection of their places of worship. However, he said that this does not resolves the issue as the attacks on the minorities have spiked over past two years.

Mr Kumar said that almost 99 percent of the Sikhs who were killed in targeted killings had left their homes in merged districts for safety of other areas.

He said that the Sikh community was really perturbed over this. Mr Kumar said that some days after such incidents terrorist organizations claim responsibility for the killings. However, he said that law enforcement agencies have been unable to reach at definitive conclusion in this regard as to why Sikhs were being targeted.

What Politicians are doing for minorities?

Mr Kumar said that as at one hand, law enforcers were failing to protect the minorities, on the other hand, politicians have also miserably failed to stand with the bruised and attacked minorities.

He said that the minorities after being attacked desired the chief minister, governor and other politicians to share their grief; however, this rarely happened.

In addition to this, he said that those sitting on minorities reserved seats in the assemblies were not their real representatives.

He said that those elected on reserved seats, when asked to fight for minorities rights, flatly refused to accept their demands, saying they were not elected by their votes.

Mr Kumar said that politicians elected on reserved seats, only followed their party lines and unable to do something for their communities.

On the other hand, Ranjeet Singh, a minority MPA in the KP assembly denied these assertions.

The MPA said that he always raised his voice for the minorities on the assembly platforms. “Whatever I say at the floor of KP assembly are not personal views or demands, rather, it reflected the views of the community,” he said.

He said that even after recent targeted killings, he raised his voice for minorities particularly about Sikh community.

KP police chief has promised to follow the five percent minority quota in recruitments in police.

Besides, he added that besides quota, minority youth will also hired in class IV seats.

In addition to this, the MPA said that he has also raised his voice for the crematorium for minorities and graveyards for Sikhs. I recently raised the issue reserving quota for minorities in education card scheme, in my budget speech at the floor of provincial assembly, he said.

The rented gurduwaras of Peshawar

Mr Kumar said that gurduwaras of Peshawar which are lying close since 1980 could not be opened for Sikh community so far. “This reflected the government and politician’s seriousness regarding minorities’ rights,” he said.

He said that KP Auqaf department has rented two gurdurawas in Peshawar to people, who had made their living quarters inside the place of worship.

“Both the gurdurwars could not be opened despite our best efforts,” he said.

Currently two gurduwaras of Bhai Beba Singh and Bhai Joga Singh in Hashtnagri and Dabgari Garden were open to community for prayers. However, Sikh community members in other parts of the city and Peshawar Cantonment used to pray on their roofs.

Mr Kumar said that it becomes very tough to live where there is no protection of life, difficulty in observing one’s religious beliefs and facing discrimination and in similar situations people start to relocate to other areas.

“This same thing is happening with KP Sikh community,” he added.

Mr Kumar said that Sikhs of KP were shifting to Lahore, Rawalpindi and Hassanabdal.

“We are hopeful of improvement in situation for us following the apex court verdict in 2014; however, it seems that the situation has rather taken a turn for the worst,” he said.

He said that now they were only demanding their right to live, business, education and health as a citizen.

Sikhs are the smallest minority

Like the rest of the country, most of the minorities’ members belong to Christians and Hindus faiths and Sikhs stood at third place.

Manjeet Singh, a Peshawar based Sikh woman activist said that though all the minorities in the country did not enjoy the rights enshrined in the constitution. However, she said that Sikhs were worse off as compared to the other

She said that scholarships and jobs quota usually go to the Hindus and Christians and Sikhs were even ignored in the welfare projects announced by the government.

She said that two Sikhs youths were murdered in broad day light; however, politicians done nothing except issuing cyclo-style condemnations.

However, MPA Ranjeet Singh was of the view that non-following of the minorities quota was not issue of Sikhs alone and other minorities’ communities were also facing the same issue.

On the other hand, IS-K has been claiming responsibility for killings of minority members in the province. These claims show the terrorist outfit growing footprint in the region; however, KP police Chief Moazzam Jah Ansari has vociferously rejected such assertions.

Mr Ansari has said that some incidents do not mean that IS-K was here in form of an organization. “There are a few terrorist who have joined the IS-K and they will eliminate soon,” he said.

However, minorities on the other hand, feel scared after the recent tailings of Sikhs and many of them are on their way out f the province.