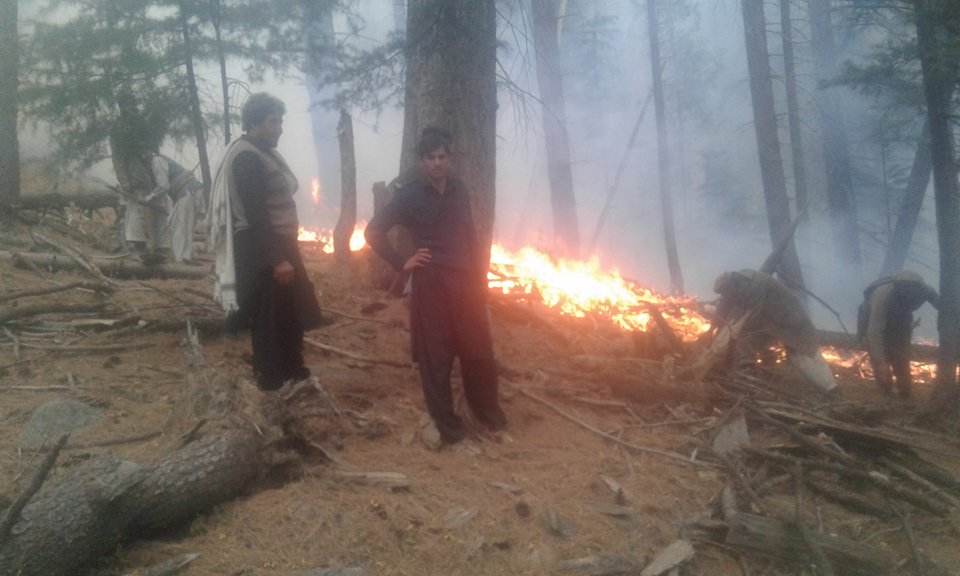 On the World Environment Day, six incidents of forest fires were reported from different parts of the province, which led to the death of four people including three women and a man.

In addition to this, some other people were injured in the fire incidents.

Forest department officials in Swat said that forests Dewlai area of Kabal, Daryal, Segram, Abala and Kot and Patai area of Charbagh were on fire. In addition to this, in Shangla district, fire broke out in Chakesar area, where the deaths have also been reported.

These forest fires incidents have been reported on June 5, when the world is observing the World Environment Day to raise awareness regarding protection of nature.

This year’s theme  of the World Environment Day is ‘Only One Earth’ and this  campaign shines a spotlight on climate action, nature action and pollution action while encouraging everyone, everywhere to live sustainably.

Mr Waseem said that he was personally present in the Patai area. He said that the fire has not damaged trees in the area, only grass and shrubs have been burnt in the blaze.

Mr Waseem said that in many cases tourists do not put down fires they light to cook food and also locals also burn dry grass ahead of monsoon rains.

“The ashes of burnt grass is just like urea fertiliser for new one,” he said.

He said that these people were damaging forests and ecosystems in their ignorance.

He also feared that more incidents of forest fire could take place due to rising temperatures. Mr Waseem feared that a little spark could lead to major disaster in this situation.

Earlier last a major forest fire gutted chilgoza, olive and deodar trees spread over an area of 60 kilometres in the Sherani district located on the border of KP and Balochistan.

Pakistan had hosted the World Environment Day earlier last year which was aimed at overcoming climate related issues of Pakistan, climate change and its adverse impacts.

Syed Hasnian Raza, an Islamabad based environmental journalist said that climate change was a global issue.

He said that Pakistan ranked fifth on the list of most vulnerable countries to climate change last year; however, this year Pakistan this ranking one step higher to sixth place.

He said that the Billion Tree Tsunami was only an element for a better environment; however, it was insufficient.

He said that they start abosopring carbon dioxide when they grow 10 years old.

Mr Raza said that Pakistan need to promote use of public transport, walking and other health friendly activities. “Pakistan needs to impose a seven year emergency for the purpose, otherwise, it would face great perils in future,” he said.

He said that not only such incidents destroy forests alone but at the same also kill wildlife and plants and force species to migrate.

He said that when forests are chopped down or destroyed in fire, then animals living in them migrate to populated areas.

He said that such a situation can also transfer viruses to the human population and infection of the monkeypox was one such example.

He said that carbon dioxide emissions in forest fires also damage the environment by increasing ozone depletion, which leads to the heating of the earth.

He said that Pakistan’s growing population has also turned into a major challenge for the environment as large tracts of agricultural lands have been transferred into housing societies.

This was not only causing food shortages but also affecting absorption of carbon dioxide emissions.

He said that to arrest climate change, Pakistan has to plant more trees and arrest the carbon emissions.

Not only the government but society as a whole to wake up to this threat, he added.