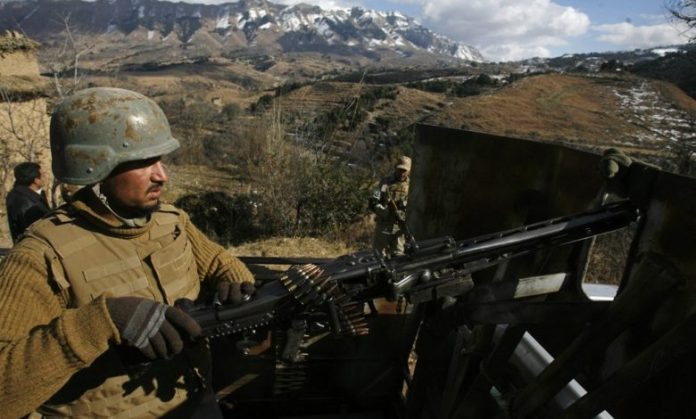 A solider was martyred when unidentified motorcyclists opened fire on him in the Bar Qambarkehl locality of Tirah area of Khyber district.

Separately, a remote-controlled blast targeted a security forces vehicle in the Malak Din Khel area of Tirah; however, there were no casualties.

Police said that the soldier was martyred when unidentified motorcyclists opened fire on a security check post in the QambarKhel area. A police official said that a solider identified as Shah Jehan sustained injuries. The injured was airlifted to the Combined Military Hospital for treatment; however, he succumbed to his wounds.

On the other hand, when a security forces vehicle rushed to the check post where the attack had taken place, a remote-controlled bomb targeted their vehicle. However, there were no casualties.

Police and security forces launched a search operation in the area following the attacks; however, there were no reports of any arrests.

It is pertinent to mention here that the terrorist attacks have surged over past some weeks. Over past week, terrorists have carried out attacks against security forces and police in Orakzai, Charsadda, Peshawar, Dera Ismail Khan and Lakki Marwat districts, leading to killing of six police personnel and injuries to several others.