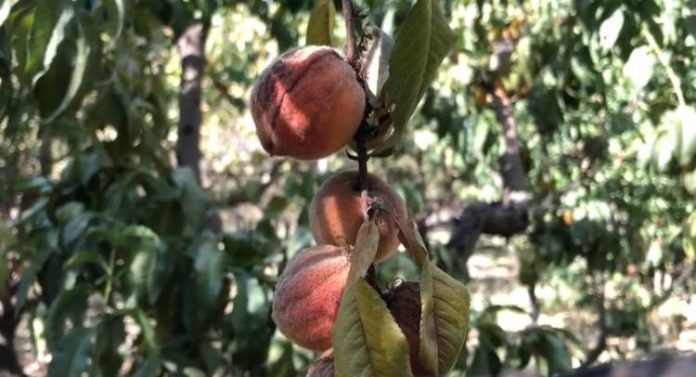 Swat district peaches are famous all over the country and customarily friends and families to ask those visiting the district to bring back famed peaches of the district.

Though peaches are produced in other parts of the Khyber Pakhtunkhwa; however, the variety of fruit produced in Swat is very well known for its quality and taste.

Local growers said that there were about dozen of peach varieties were produced in Swat. The district produces about 400,000 tonnes of the fruit each year.

Vehicle loads of peaches from Swat continue to unload in Peshawar and other areas’ market from May to September for about five months of the year.

However, climate change has badly hit the peach orchards of the district. The produce of this season is not only smaller in size, rather, not up to the mark in terms of taste and color.

Peach growers in Swat said that lesser yield and smaller size has caused heavy financial losses to them.

A local grower said that hurdles in the way of watering of the orchard’s baldy hit their produce.

Dr Arshad Khan, an agriculturist from Swat said that the district produces different varieties of the peace from May till September.

However, he said that the second batch that hits the markets in June, was causing losses to the growers.

“Most of the produce is wilted and mostly got rotten even before ripening,” he said.

Shireen Khan, a local peach grower in Swat said that low yield has dented their hopes.

In the past Swat was famed for its apple and pear farms as well. However, the difficulties involved in watering the farms, led to the elimination of those orchards. These days’ peaches have replaced all other verities of fruit.

Muhammad Usman, a journalist writing about climate change said that failure to introduce good irrigation system in the district will not only damage the peach farms but also other fruits and vegetables as well.

“Only by innovating the River Swat fed irrigation system of the district will save the famous peaches of Swat,” Mr Usman said.