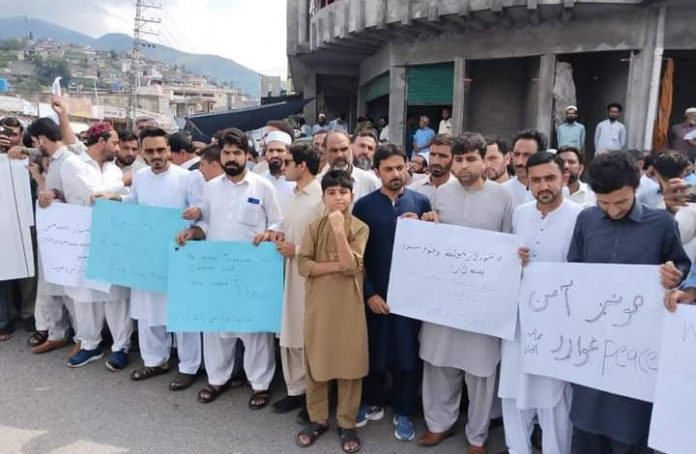 Demonstrations and rallies were staged across Swat district in protest against the worsening law and order situation in the district on Friday.

Large number of locals and civil society members took to the streets in Kabal and Khawazakhela tehsil of Swat district to protest the lawlessness. The protesters were carrying banners and placards, inscribed with slogans about peace.

Addressing a press conference at the Kanju Chowk of Kabal tehsil, local elders including Wakil Khan, Fathullah Khan and Dr Amjad Khan in Khawazakhela said that they wanted peace on their land.

The speakers said that people of Swat would not tolerate fire and blood on their land. “We will stand against those who will try to create choash, injustice and deprive other of their rights,” the speakers said.

They said that besides security forces, people of Swat have also rendered great sacrifices for the restoration of peace and they would not allow this peace to be disturbed.

They said that Swat was being pushed towards 2008 like situation again; however, they would not allow this to happen.

The speakers said that they could not shoulder more bodies and bury their near and dear and see their families grieve for their losses.

They said that Swat was tourist spot; therefore, they did not want any lawlessness there.

“Government and its institutions should play their role in maintenance of peace in the district,” they said.

At this occasion, the protesters kept chanting ‘we want peace on our land.’

It is worth mentioning here that on August 8 terrorist had attacked Chaprial police station in Matta and the next day police and terrorists clashed near the Balasur area of Matta tehsil, which left a DSP and three other cops.

The clash has sent shock waves of fear among population regarding return of militancy to the district.