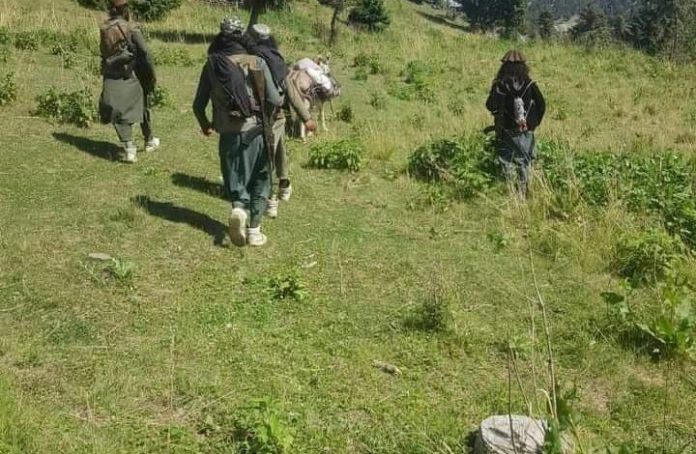 Tehrik Taliban Pakistan (TTP) militants who had entered Matta tehsil of Swat last week, were retreating back to Afghanistan and the authorities have postponed a planned operation in the area, observes said.

Earlier last Saturday, KP government spokesperson had said authorities have made arrangements for launching operation against the militants and issued militants with an ultimatum to leave the area within 72 hours.

The deadline will end midnight on Monday.

Mustahq Yousafzai, a senior Peshawar based journalist in a tweet said that TTP militants were leaving their positions in Swat Mountains and leaving for Afghanistan.

He said that TTP militants were retreating to Afghanistan via Dir and authorities have postponed the planned operation.

Tahir Khan, a Pak-Afghan affairs analyst said that harsh public reaction to emergence of TTP militants in the Swat and Lower Dir has forced the militants to retreat.

Quoting a military statement, he said that there was definitely some militant movement in the area. However, he said that both the public and security apparatus showed a harsh stance once the Taliban released video of security personnel detained after a clash in the area.

Besides, he said that Taliban wanted to check the public reaction to their emergence in Swat. “This time it would be difficult for the TTP to stay in Swat,” Mr Khan said.

He said that at one hand, police and army personnel were present in the valley while on the other hand, public also sharply reacted to the emergence of militants.

Mr Khan said that TTP had turned a major force in Bajaur district in 2008 and some of them also entered Swat mountainous areas. “When TTP militants started activities against police, landlords and criminals in the area, public support for the surged,” he said. However, he said this support declined after the militants started targeting public.

Mr Khan said that public reaction was very harsh after the emergence of August 8 video, which also forced the provincial government to launch an operation in the area.

On the other hand, ISPR, the military media wing in a statement said that during the past few days, a misperception about alleged presence of large number of proscribed organization TTP’s armed members in Swat Valley has been created on social media.

It said that after confirmation on ground, these reports have been found as grossly exaggerated and misleading. “Presence of small number of armed men on few mountain tops between Swat and Dir has been observed, located far away from population. Apparently, these individuals sneaked in from Afghanistan to resettle in their native areas,” it said.

ISPR said that a close watch was being maintained on their limited presence and movement in mountains. Required measures are in place by all LEAs for the safety and security of people of adjoining areas. Presence of militants any where will not be tolerated and they will be dealt with full use of force if required.

Aqeeel Youafzai, a Peshawar based journalist and author of several books on the militancy in the region said that there was TTP presence in Swat and they were leaving the area for Afghanistan following government orders.

He said that the ISPR denial of militants’ presence was inappropriate as armed people in small numbers could be seen taking hostages security officials.

Mr Aqeel said that following the ISPR statement, MNA from Swat Murad Saeed also admitted presence of militants in his area. Similarly, former Prime Minister Imran Khan has also claimed that his party members were being threatened by Taliban.

KP government spokesperson Barrister Muhammad Ali Saif said that situation in Swat was under control and those taking law into their hands will be dealt strictly.

Talking to TNN on Saturday, he said that LEAs were present in the area and trouble makers would be dealt strictly.

To a question, he said that some of the TTP remnants were left in the valley while majority of them left for Afghanistan; however, recently some of them returned from Afghanistan.

He said it was not a big issue and the situation was under control and tourist can visit the valley without any fear.