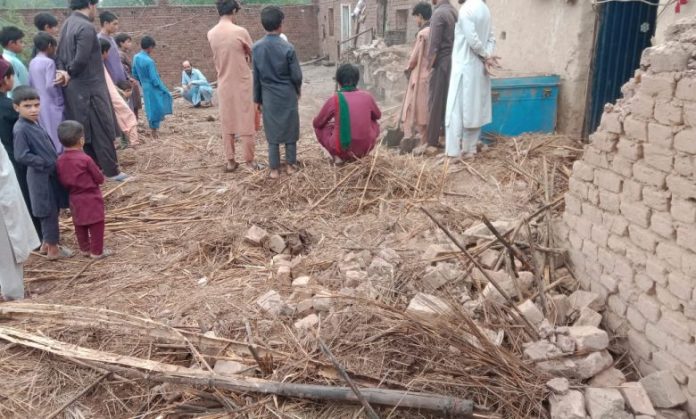 Two persons including a solider were killed and 10 others were injured in separate incidents resulting from powerful earthquake that hit the region early hours on Wednesday, sources said.

Sources said that a soldier was killed and two others were wounded when the roof of their post collapsed due to powerful tremors in the Datakhel tehsil of North Waziristan.

The dead was identified as solider Umsan while Hawaldar Akram and sepoy Kashif were injured. The injured have been rushed to the hospital for treatment.

In another incident, a mother and her eight children were injured due to the earthquake in the Akakhel area of Bara tehsil of Khyber district.

A footballer identified as Kashif Alam was killed in Pezu area of the Lakki Marwat district when the roof of his collapsed due to the earthquake.

SHO Pezu Muhammad Ayaz Khan confirmed the casualty due to the earthquake in the area. He said that the man was asleep in his room when the roof caved in, burying him alive.

Afghan earthquake has killed more than 1000 and killed over 1500

The powerful earthquake measuring 6.1on the Richter scale hit the region on 1:55am on Wednesday. US Geological Survey said that it epicenter was in the Pak-Afghan border, at a depth of 51 kilometers. Locals said that its tremors were felt for about 30 to 40 seconds.

In addition to this, the earthquake shocks were felt as far as Khyber Pakhtunkhwa, Islamabad and Punjab.

International media reported that the earthquake has killed more than 1000 people in the war torn country and injured 1500 others.

Raees Hozaifa, the director of information and culture in the eastern province of Paktika told the New York Times that 1,000 people in the province had been killed and another 1,500 injured.

The earthquake has badly hit the Paktia, Paktika and Khost provinces of the war torn country.