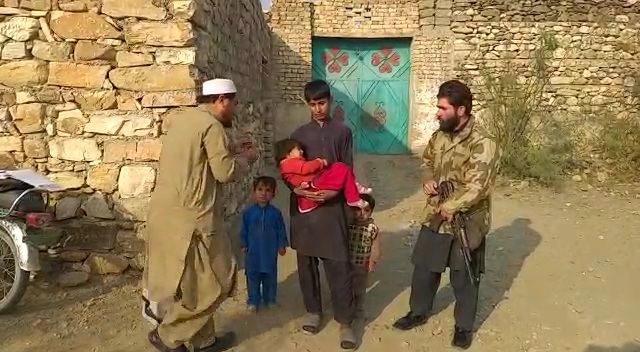 Two police personnel and a polio worker were shot dead while a child was injured when unidentified attackers opened fire on polio team in North Waziristan district on Tuesday.

The attack took place on the second day of the ongoing polio immunization campaign in the province.

Officials of the district administration and police were not available for comments while on the other hand, polio campaign officials did not offer any comment.

The attack took place during polio vaccination drive in the province which is going on since Monday. On the other hand, North Waziristan had also reported another polio case a day earlier.

The polio campaign which started on Monday is being carried out in eight districts of the province and aimed at inoculating about 2.5 children across the province.

On the other hand, in the  districts of Nowshera, Mardan, Charsadda, Mohmand, Buner, Swabi, Kurram, Bajaur, Hangu, Dir Upper and Lower, Malakand, Manshera the campaign is targeting Afghan refugee camps and those union councils adjacent with Afghanistan.

KP Emergency Operation Center’s spokesperson Zeeshan Khan said that they have setup 25 points in areas adjacent to Afghanistan, where people of all age groups are vaccinated.

Mr Khan said that in addition to this, they have also set up five formal crossing points have also been setup in North and South Waziristan, Kurram, Khyber and Chitral to eradicate polio virus.

The special campaign is targeting those areas vulnerable to polio virus and Afghan refugee camps. EOC figures show that over 214,000 children would be vaccinated in refugee camps.

Rasheeda Bibi who works at the Peshawar’s Taj Abad refugee camp said that polio drops refusal was very uncommon among Afghans as compared to locals. She said that even those having doubts are persuaded easily.

However, she said that the major problem in these camps was the fluctuation in children number as they families kept moving. She said that in the ongoing campaign, there 450 new children among those they vaccinated who were not on the vaccinators rolls.

Ms Rasheeda said that majority of them had come to Pakistan after Taliban takeover of Afghanistan.

KP chief minister Mahmood Khan had launched the campaign on Friday by giving drops to children at the Police Services Hospital.

KP secretary health Amir Sultan Tareen and other officials were also present at this occasion.

Mr Tareen at this occasion said that emergence of recent polio cases from the North Waziristan was regrettable. He said that polio cases have emerged after a gap of 21 months. Mr Tareen also said that it also showed the efforts which have been made to keep the province free of polio.

On the other hand, health experts said that the special campaign was being run to control polio outbreak in Tank, Bannu, Dera Ismail Khan, Lakki Marwat and South and North Waziristan to stop virus from travelling to other parts of the country.

Pakistan has during the current year reported 11 cases of polio from North Waziristan district. According to officials, most of the cases were either refusal or missed in the immunization campaign.