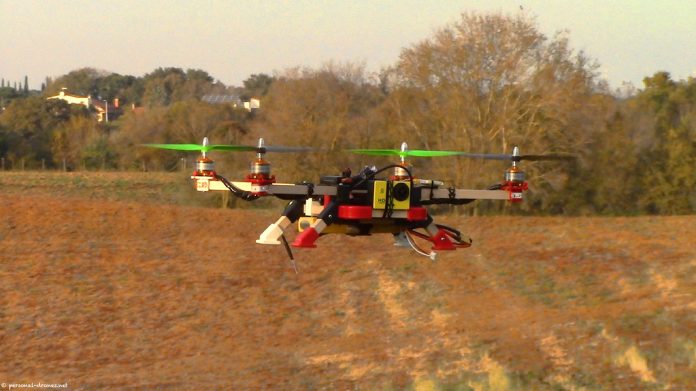 Pakistan is an agricultural country and agriculture has the status of backbone in our country’s economy. For the last few years Pakistan agriculture faced many issues. One of these issue which is of great importance is the lack of education in farmers and knowhow about the new inventions in the field of agriculture. At that time the facilities granted to the peasants like the movement, fuel and storage centers shortages and also understandable issues faced by the farmers. With the increase in global population, new agricultural technologies are being introduced in many countries and their use can easily increase the economic values of the people.

Drone is a sophisticated invention in the scientific world. It is an aerial machine. Which not only monitors the crop production but takes care of the produce in the agricultural fields. It is a man-made machine which has reputed performance in agricultural field. It is used in more than half of the world due its‘s greater benefits in the fields. Economic values in the world are growing day-by-day.

First ever drone was invented in 1935, and in agriculture it works efficiently and fastly. Industry of agriculture is using drone technology. Crop production depends on water and soil. Provision of water in greater quantity to the crop is possible through the efficient use of drones.

In the past, pipeline system in the fields for irrigation purposes cost too much. The possibility of great water losses In the system disappointed the farmers. But now, it is possible to irrigate the field in a day, which is easy and profitable. Drones has great capacity to sprinkle water  over the crops, and this activity is possible because of the camera-system installed in it. These cameras may typical or thermal in nature. They work like the eyes bird through which we can see any type of irrigation in fields. Cameras in drones are adjusted and installed in such a manner so that we can zoom each and everything. Mostly two cameras of XT quality are used which gives a clear picture of land. Drones works like robot which give us ideas which helps in carrying out the correct decisions for better crop production.

Drones have changed the life-style of farmers and they are impressed by its invention and introduction into the agricultural field. It can plant tress easily and cultivation of forests on a large scale can be made through the use of this technology. In this activity the drones are used to make a survey of feasible areas for plantation. It give details in the form of 3D map, and if the survey is correct than a software works in the drone and plane for plantation is made which works on the principle of photography. In this procedure, the second step is the use of rotor which is composed of a seed-gun. When the drones fly over the lay-out  plan they fire seeds made of chemicals or fertilizers which helps in plant growth. This type of activity is used in bio-carbon engineering process through which we can grow a plant in a day. The seeds or bullets in the seed-gun are composed of various bio-ingredients which helps in preventing the plants from environmental diseases.

Drone technology can be used to draw a map of crop field. GPS system is a common technique used in drones after 3D cameras which is used for control, positioning and speed of the machine. Drone cover larger distance through GPS and requires less time in determining the height of plants. GPS can detect various attacks of diseases and helps the farmers in carrying out numerous tasks. It informs the farmers about the status of environment and the hotness and coldness of the atmosphere can be determined for the farmers to work or not.

This technology can work in dark through the installed software and positioning system. Sometime the soil may be acidic, this is because when rain falls heavy metals like aluminum, mercury, ions of sodium and potassium ions increases the acidity of soil. Carbon dioxide is also causing acidity in soil. Soil with high PH level is called as basic soil, and it is the worst form of soil. The process used for studying the status of soil is called as basic soil sampling, and this process can be easily came out by using drone technology. The process is not that much simple because collecting soil sample requires  5-10 years. It is challenging process and the activity is held with the use of drone technology. Drone collects sample from different parts of the soil where-ever necessary, its software gives the results and ultimately we can gives whether the soil is acidic or basic in nature. Use of drone technology can help us analyse plant growth because it focuses on each and every part of the land and thus result in more or less produce of the crop.

Farmers can use the drone technology in herds of different animals their location and identifying grasslands for their animals. If an animal is wounded or sick, dislocated or is giving birth to a baby animal may be located through GPS in drones and doctors can reach on time for medical aid.

Previous year, the locust crises threatened  the agriculture. The Pakistani minister for science and technology signed an agreement with a private company, ABM-SATUMA, for introduction of drones into the agriculture sector and against the locust crises which will be handed over the National Disaster management Authority (NDMA). The minister further added that the farmers do not have to the affordable and easy in use Hexacopter drones but instead could rent it.

The technology would be used in spraying pesticide as nearly 60 districts of the country. The fly Dragons E616S is a combination of speed and power, the use of which can cover 4000-6000 m2 in just 10 minutes that is 40-60 times faster than manual spraying.

This drone is the updated version of popular E616 6 axis drone. It can be folded with C-type arm fixing clip, 16 liters tank capacity with a total weight of 7.5 kg and water proof quality.

Ahmad Rehan, another drone producer highlighted the civilian applications of drones in agriculture sector. He suggested the use of drones for farmer instead of its high cost for the farmers health which is vulnerable during the manual spraying of pesticides or other toxic liquids. He argued that Prime Minister Imran Khan’s billion trees tsunami project was not possible without the use of drones.

In July 2020, the government of Pakistan shared plans to formulate a National Drone Policy and in March 2021, PM Imran Khan announced the creation of Civil Drone Authority to regulate announced aircraft in Pakistan.

The market for agriculture drones has ballooned with the beginning of agriculture cooperation under CPEC. Under the CPEC collaborations, farmers have already achieved a broader trajectory using drone technology. With the use of drones farmers realize significant savings in labor(around 20-30% laborers per day), water (80%), pesticides (25%) , and plant protection(30%), achieving greater precision in crops operation and saving 60 dollars for each hectare of wheat, rice and maize crops.

Machines makes our work easier in every field of life. Modernization of the techniques used in agriculture is the need of the day. Manual labor in crops production yields less than the use of mechanized labor, which requires less time with high proficiency. Drones In this context are really helpful in reducing the time and cost of farming. But on the other hand the government must introduce standard operating procedures(SOPs) for the use of this technology. Industries and Research centers shall be given incentives to invest in making and modernizing the technology. Special education centers for the use of drones in agricultural sector shall be established in order to maximize crop yields.

Afaq Ahmed is a student at the Institute of Food Science and Nutrition at the University of Sargodha.