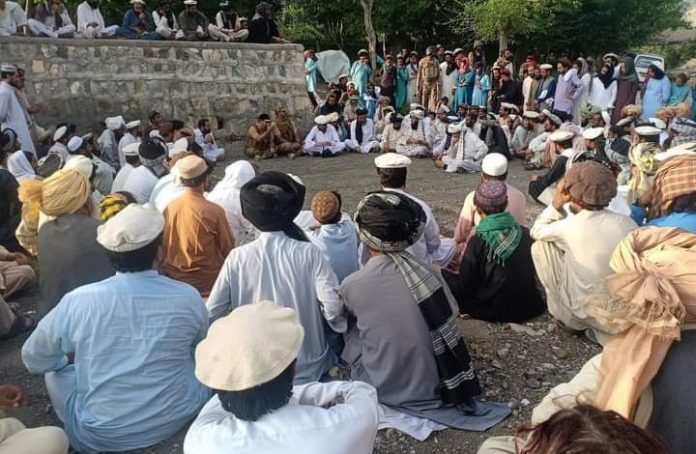 Utmanzai tribesmen of North Waziristan after talks with the government jirga have decided to end the road blockades in the district as the jirga asked the elders for two weeks time to discuss their demands.

The jirga met the Utmanzai elders on Friday and jirga members asked the elders for two weeks to discuss tribesmen demands with the relevant authorities.

The jirga meeting with the elders took place at Eidak area of the Mir Ali tehsil of North Waziristan. A 16 member jirga met the 54 members of tribal delegation and discussed tribesmen demands.

Anwar Dawar, a social activist from the district said that earlier the government jirga asked the tribesmen for 10 days time to discuss their demands. However, jirga chief and former Khyber Pakhtunkhwa chief minister Akram Khan Durrani asked for five more days, which the tribesmen agreed to.

Mr Dawar said that jirga assured the tribesmen that they would take up the tribesmen issues with the prime minister, defense minister and senior army officials.

Mr Dawar said that tribesmen decided to end the road blockade at Eidak at the jirga request; however, their protest will continue. However, the tribesmen agreed to not to observe the Pakistan Independence Day as black day.

North Waziristan tribesmen are protesting against lawlessness and targeted killings for past 28 days at eight places across the district and also shut down business centers and roads in protest.

However, Utmanzai elders said that they have held several rounds of talks with authorities, which did not bear fruit. “If the ongoing talks failed, then, they will be forced to go to Islamabad to protest,” they said.

The tribesmen are demanding restoration of law and order in the area and claimed that since operation Zarb-e-Azb launch about 480 tribesmen have been murdered in targeted killings.

The operation was launched earlier in 2014 to cleanse the area from militants.

He said that 42 security personnel have been killed in district during the current year while 63 incidents of targeted killings were also reported with most of the happening in Mir Ali.

Akram Khan Durrani, the head of the jirga told reporters that even today two people fell prey to targeted killings in North Wazirisitan.

He said that situation was deteriorating in the region; however, provincial government was not taking the issues seriously.

Mr Durrani said that the jirga was constituted at the Prime Minister orders and he said that hopeful of resolution of issues through the jirga.

Besides, he said that they have reopened mobile and internet facilities. “We are trying to resolve the issues through dialogue,” he said.

He said that North Waziristan was rich in mineral resources and restoration of peace will bring stability and prosperity to the region.

Mr Durrani said that he will place tribesmen demands before the premier and try to resolve them.

Following the jirga, the tribesmen announced to open roads for 24 hours and asked the jirga members to ask government to take concrete steps for peace in the region.

Marwat jirga later asked authorities to constitute an all parties jirga to held talks with the North Waziristan tribesmen.

On August 10, Prime Minister Shahbaz Sharif constituted a 16 member jirga to talk to the protesting tribesmen; however, ruling Pakistan Tehrik Insaf was excluded from the jirga.

It is worth mentioning here that earlier government has signed an agreement with Jani Khel tribesmen of Bannu, which was never implemented.

The Utmanzai tribesmen said that if their demands were not met within next two weeks, then they will be forced to block roads again. However, the protest will continue without interruption.