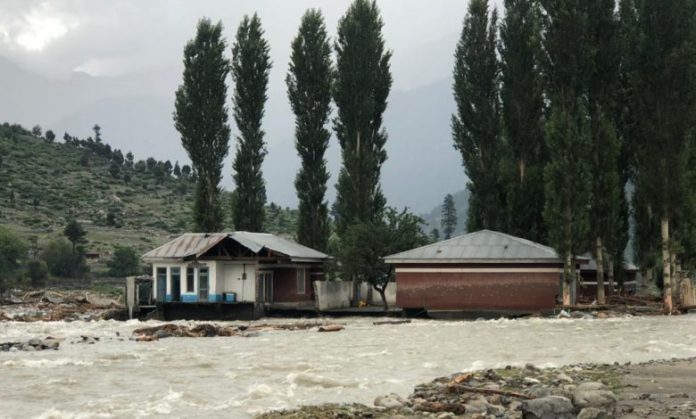 Flood caused damages to the hospitals and other healthcare facilities in Swat district are taking its toll on local populations.

District administration figures show that the floods have badly affected mountainous area of the district and particularly Behrain tehsil.

The raging torrents of River Swat have washed away a portion of basic health unit, located at the Kalam’s scenic spot Utror, depriving the locals of basic healthcare facilities.

Ghulam Ali, a social activist from Utror area told TNN that the destroyed BHU was the only healthcare facility available to the 40,000 population of the area. “The locals have nowhere to go for their healthcare needs,” he said.

Besides, he said that after the floods, the area was also facing outbreak of several diseases. “For two weeks, the area was cut off from the rest of the country and doctors remained stranded in Mingora while the population was dependent on medical technicians for their treatment,” he said.

He said that the floods completely destroyed doctors’ rooms and other facilities of the BHU and currently the facility was out of use. Mr Ali asked the authorities to start rehbalitation work on the health facility as Minogra and Madiyan hospital were too far away and locals could not afford to pay for the trip to hospital and back.

On the other hand, Dr Kifyatullah, a health department official told TNN that his department provided; however, the floods were greater than anticipated and the supplies fell short of the demand.

However, the official assured that the situation was gradually improving. “At the start we faced communication issues as staffs were unable to access the healthcare facilities while road closure also made transportation of medicines difficult,” he said.

In addition to this, he said that several people were also trapped in remote valleys after the floods.

However, he said that following restoration of road links, international organization like World Health Organization and other charitable bodies helped them setting up over 80 free medical camps in the area.

He said that there was standard procedure for providing relief in emergencies which needed to be followed. However, he said that despite shortcomings and issues in community response, health department was trying to follow international standards.

Gul Meena, a local told TNN that the floods have laid waste to entire area and she had also fallen ill due to the unavailability of clean drinking water. She said that absence of healthcare facilities also doubled her miseries. “There were no medicine, drinking water and roads to evacuate serious patients to hospitals,” she said.

She said that the helicopter service was started after the situation normalized a bit; however, a few sorties a day were insufficient to meet needs of over 45,000 populations.

Meena said that still there was no lady doctor in her area and there was no facility available where women can go in case of childbirth. “People are going to Minogra for childbirths and in such a situation dilapidated road condition adds to the misery of women,” she said.

Dr Muhammad Iqbal, in charge of the Utror BHU told TNN that they had setup medical camps in the villages during the floods. However, he said that there was shortage of basic facilities at healthcare centers as these centers lacked furniture, equipment besides shortage of medicines.

Dr Iqbal said that medicines should be supplied to them on timely basis and it would greatly help them.

Besides, he said that electricity supply and provision of solar services along with drinking water and sanitation will greatly alleviate the miseries of the locals.

On the other hand, health department figures showed that floods have destroyed 15 hospitals and BHUs out of 76 facilities across the district.