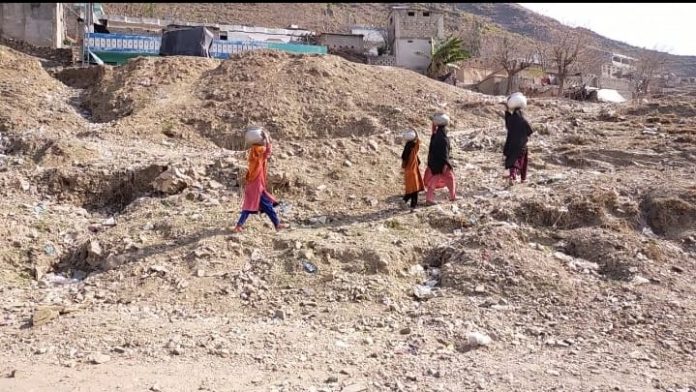 Locals in remote Torghar district of the province blame the unavailability to water for hurting education of girls.

Fazal Khan, a local said that instead of going to schools, Torghar girls waste their time on fetching water. His home is located about two and half kilometers away from a natural spring; however, one has traverse a difficult track to approach it.

He said that about fifty families living in the village rely on this spring for their water needs. He said that besides nearly 300 other households living in the nearby villages were also facing water shortage. Mr Khan said that even pregnant females walk long distances to fetch water.

Mr Khan said that PVC pipes installed in the village have burst open; however, no one was ready to repair them. “Water shortage in the area is a test for our women,” he said.

They also point out if the corrective steps were not taken, then Pakistan will turn into most water stressed country in South Asia.

Talibon, a resident of Jehangirabad area of district Jadaba said that their area’s PVC pipes have also burst open, forcing the girls to fetch water on their heads.

He said that since elderly women cannot go to the spring, therefore, girls have to carry out this chore.

He said that on weddings and funerals, girls have to take leave from their schools to fetch water.

“The district administration should setup water supply scheme to save their girls future,” he said.

On the other hand, over 70 per cent of Pakistan population has no access to clean drinking water. The total available water stands at 250 billion  cubic meters and 90 per cent of it is used for agriculture, four for industrial and only six for drinking purposes.