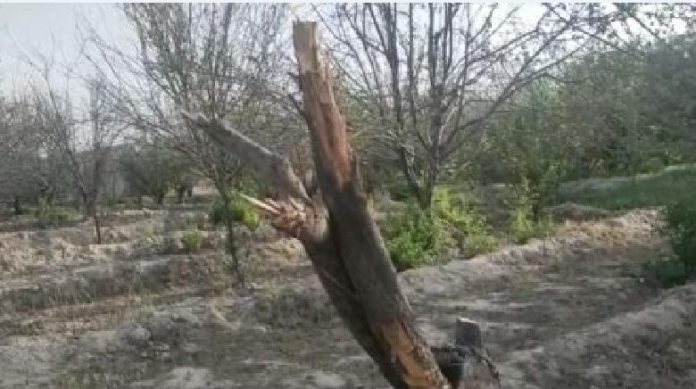 Khyber Pakhtunkhwa South Waziristan district is hit with a severe water shortage due to climate change.

The report said that Pakistan stood on third position in terms of harvesting underground water for agriculture. Regarding the Wana, capital of South Waziristan, the UN report said that this town was famous for its agricultural produce.

Wana produces about 64,500 tonnes of apples, 70,000 tonnes of vegetables and 8,500 tonnes of pine nut or chilghoza annually. However, during the current year, vegetables, fruit and other agricultural produce has been greatly affected due to water shortage.

Abdur Rahim, a local told TNN that his apple orchids used to generate Rs 1.4 million per annum; however, the water shortage has badly hit the yield and their profits have been badly curtailed.

Mr Rahim said that while many orchids were affected due to water shortage, some others were altogether. However, he said that government should construct small dams all over the districts to conserve water.

He said that snowfall was common in the district; however, there was no plan to harvest snowmelt and put it use for farming. Presently underground water level has dropped to 600 feet and it is fear to drop further.

Noor Ali Wazir, a local journalist said that most of the apple orchids of the South Waziristan district have dried up due to water shortage. “In Shalom area of district, sources of drinking water have dried up, forcing people to migrate from the area,” he said.

He said that many of the people were waiting for rain to store it for drinking purpose.

Mr Wazir said that climate change experts have blamed installation of solar system and ruthless cutting of trees as main reason of water shortage. He said that since solar tube wells cost little or nothing to pump water from underground, which led to wastage of water.  In addition to this, he said that trees in the area were also being felled mercilessly.

Me Wazir said that local people have demanded government to construct small dams; however, authorities have not taken these demands seriously.

However, he said that small dams and steps for water conservations were very important and if such steps were not taken then the people will be forced to migrate due to water shortage.