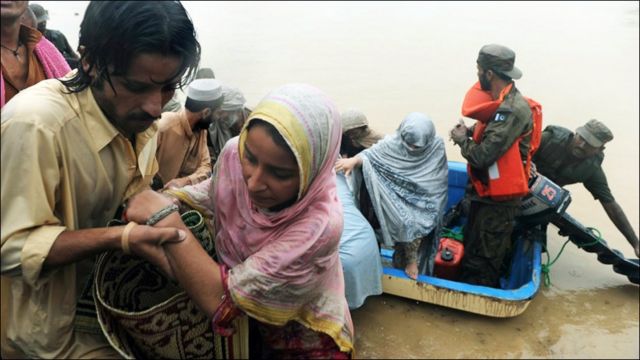 Recent floods have affected more than 4.3 million in Khyber Pakhtunkhwa and displaced more than 200,000 people in different parts of the province.

Shahwana Shah, a social activist and head of NGO Da Hawa Lur said that provision of sanitary pad for women was most important issue faced by the women. She said that in rural areas, females even avoided talking to their mothers and sisters regarding this issue.

“In such a situation, life for women becomes very difficult in relief camps,” he said.

She said that sanitary pads should be provided with other relief items in relief camps. Besides, she said that many among the women were pregnant.

Ms Shah said that medicine and good diet was a must for pregnant women and everyone needs to play their role in this regard. She said that though it was not possible for preparing a dieting plan right now; however, good diet and regular medical checkup was necessary for this.

On the other hand, most of the volunteers working in flood relief are males while on the other hand more than half of the affectees in camps are females. It is very difficult for rural women to interact with males for food and other items; therefore, women volunteers are also necessary.

Dr Sylvia Ali, a psychiatrist said that uncertainty in relief camps was most dangerous for those staying in relief camps. She said that the houses which took years to built have been destroyed in an instant.

Ms Ali said that now these people have to rebuild their lives from scratch and have to constantly worry about reconstruction of their homes.

Similarly, she said that women who have always lived in purdah were now living in camps before several people and this was putting mental strain on them.

Ms Ali said that in such a situation women rehabilitation both in shape of construction of houses as well psychological treatment were also must.

Dr Alina Ali Shah, another doctor who has visited several relief camps in Nowshera and Charsadda said that children in refugee camps were struggling with food poisoning due to the substandard food.

She said that many a children were facing gastro-intestinal issues and they needed particular care for this.

Dr Alina said that women and children had weak immune systems and for the same reasons they were falling ill in great numbers. She said that soon after flood waters recede, diseases like dengue, malaria and dysentery will spread in the flood affected areas and they need to curbed as soon as possible.