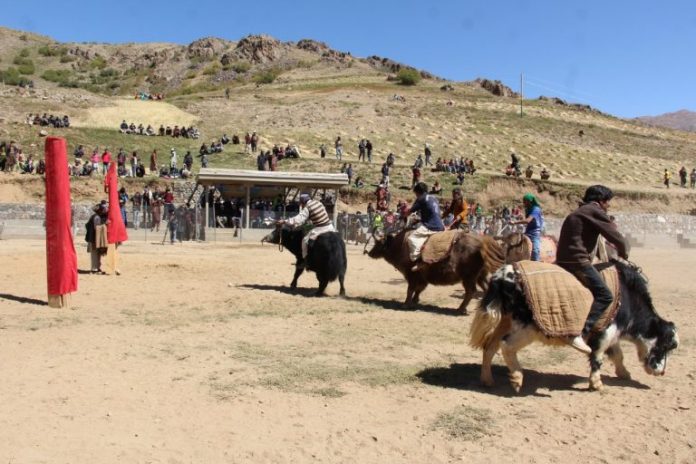 CHITRAL: Polo is a popular game in Chitral which is played with horses, but in Broghil Valley, the game is also played with yaks.

There are some changes in the rules for yak polo. In normal polo, every team has six horses, but in yak polo, three yaks are enough to make a team. A large ground is required for polo, but in case of yak polo, the ground is relatively smaller as yak cannot run as fast as a horse can.

There are some other significant and interesting changes in yak polo which makes it a unique and attractive sport. In polo, as the horse runs faster, it is easier to take it closer to the ball and control it, but yak runs slower and manoeuvring is also difficult so reaching the ball and hitting it is much more difficult. Scoring a goal in yak polo is a very difficult task and only the expert riders having experience of yak riding can handle the situation. The goal post is the same which comprises two poles on each side of the ground, and the team which manage to put the ball between the poles more times in stipulated time are declared winners.

Under the local traditions, musicians, who are called Ustads, play music with sarnai and drums to encourage and energise the players. When a player scores a point, then the referee puts the ball in his hand and he is given charge to start another rally from his goal post towards the goal of the opponent team with a stick like hockey, while players from other team try to stop him and snatch ball from him. The players enthusiastically celebrate the goals and musicians also play music which creates an electric atmosphere.

Yak is a rare species which is found in cold areas. It is not only used for yak polo, but also for transportation of luggage and travel by local people. The milk from yak is very thick and products yogurt, cream, butter etc formed with it are very tasty.

The yak polo players in Chitral have called upon the government to encourage them by giving them government jobs and financial package as they are keeping this historic sport alive on their own since long.